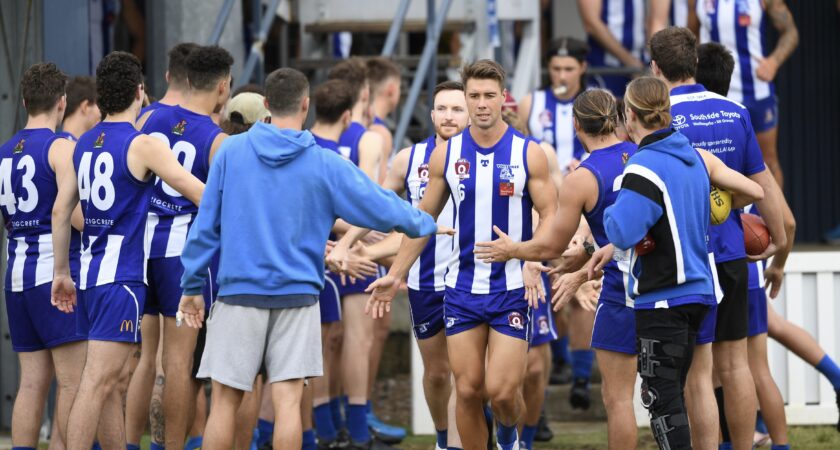 It is hard to believe that a team as solid as Mt Gravatt showed itself to be across the 2021 season, registered just three wins for the year.

There is so much upside to this team with some gritty and courageous performances that could have seen it capture some big scalps in the likes of Redland-Victoria Point, Labrador and Surfers Paradise if not for momentary lapses in the game that saw the opposition get a run on.

The Vultures played the Sharks, Tigers and Demons twice and across all six games were firmly in the contest for large chunks of those matches. The Sharks and Tigers were considered major premiership threats for most of the season and the Demons were as tough as anyone to beat on their day; and yet the Vultures recorded just three wins.

Mt Gravatt played nine of its 13 matches against teams that finished in the top six and aside from a 14-goal loss to Broadbeach where Moncrieff kicked 10; it was firmly in the hunt in every other match (even against Broadbeach the margin was five-goals at the break).

The win of the season without question was the Round 12 win over Morningside at Jack Esplen Oval. The Vultures led at every change and held on for a famous two-point win.

Jonah Licht on his day was a box-office draw. He kicked goals from everywhere and kicked more than half of his 34 goals for the season against the best backlines in the competition.

Gavin Grose is not only a club legend, but a league legend and he was simply outstanding in defense with the iron fist that kept the boundary umpires working overtime with his remarkable spoils.

The 2021 season was the curtain-raiser for the 2022 season because the potential against the best teams in the competition last year will no doubt have them looking over their shoulder for the rampaging Vultures in 2022.

The Vultures will be led by former Lion and Blue Tony Lynn in his second season at the club. Lynn has incredible experience as a player in the SANFL, played State representative football; played for two clubs at the elite level and retired as a premiership player and best on ground winner for Mt Gravatt in 2002.

It was fitting that he would return to the club as coach in the quest to take them back to the premiership promise land that he enjoyed as a player.

Jack Castle – Eastlake, Canberra; a ruckman and key forward who is very athletic and hardworking and spent some time in the GWS Academy.

Luke O’Sullivan: Aspley (VFL); a big bodied mid who is extremely fit and very good skills. He is a great leader on and off the field.

Dylan Smith: Aspley (VFL); is a tall rebounding defender/ wingman who is an excellent leader and a great intercept mark.

Mt Gravatt has up to 10 players in the Colts that could run through the Seniors across the season which is a tremendous sign of its successful development program.

Fletcher Gay-Brown is one of the young stars to watch. He was a member of the 2021 Brisbane Lions Academy Squad and was quite influential in parts in the match with the Suns at Brendale Oval in 2021. He has not looked out of place in the Senior team across practice matches throughout the pre-season.

”There are far too many to name without missing any. We will play our young guys on merit and ability with no age limitations on there development. We will continue to be a strong destination club for Junior development,” – Lynn

”We are a very young group with nothing to lose. We have set a number of smaller short-term goals to achieve. Our long-term goal is to make finals.” – Lynn

BROADBEACH – they are the reigning premiers and the benchmark for the league on and off the field.

TEAM/S LOOKING FORWARD TO PLAYING MOST AND WHY

”Sherwood & Morningside a strong rivalry that dates back decades. We always get great crowds to these games showcasing community football,” – Lynn

Jonah Licht – captain of the team, a quality key forward

There is a lot to like about the development and direction of where Mt Gravatt will place in season 2022.

The losses of Grose and Harrop hurts its midfield and defense but the addition of O’Sullivan and Smith into the engine room and across half back will add to that hard edged competitive instinct that features so strongly through the team. With a one-two-punch combo of Castle and Licht up forward; all of a sudden the attack looks a lot more dangerous and both players will have opportunities to move into the midfield.

Lynn has a great game plan and a terrific way of developing younger players to play key roles. What we experienced last year in his first year as coach was a high level of ruthless aggression where there was pressure applied to every contest and disposals were made to be earned from the opposition. The top teams knew they were in for a battle.

With that said, there is no reason why this group can’t move up the ladder. There is significant improvement made already across the off-season with some positive signs that this group will continue to push the top teams and even beat a few of them.

If you’re a Vultures fan, you’re optimistic about the season ahead and you deserve to be.