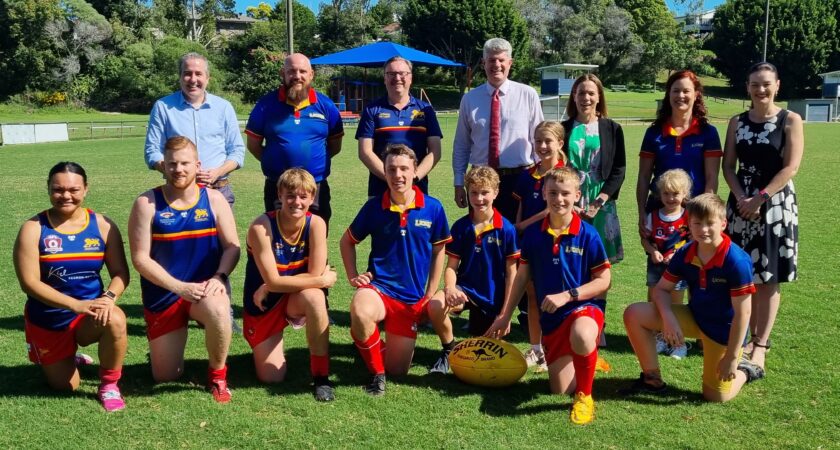 “The oval renovation and new irrigation at the Kedron Lions are part of The Gabba’s 2020 AFL Grand Final legacy,” Ms Linard said.

“Some 500 tonnes of sand were laid under 17,500 m2 of hard-wearing Wintergreen couch turf with the Lions also putting in a new sprinkler and pump system.

“We’ve delivered on the Palaszczuk Government’s $100,000 election commitment to the Kedron Lions with $32,000 also secured from the Community Gambling Benefit Fund and $120,000 from Brisbane City Council.

“This community partnership is a great win for the club’s 494 registered players including Lady Lions, juniors and colts.”

Member for Stafford Jimmy Sullivan said Kedron Lions football season was off to a flying start.

“I can’t think of a better way to kick off the 2022 season than running onto a first-class oval inspired by the legacy of The Gabba’s history-making 2020 AFL Grand Final,” Mr Sullivan said.

“We want to encourage more girls and women to get onto an AFL oval and bring their best game to their local club.

“Girls and women currently make up 42 per cent of player rosters at community AFL clubs in Queensland.

“And we know when girls and women have access to female friendly community sport infrastructure, they’re more likely to join a club, stay active and excel.”

Sport Minister Stirling Hinchliffe said the AFL and the Palaszczuk Government had invested $8 million in the Grand Final Facilities Fund.

“Queensland helped save the 2020 AFL season from the Covid pandemic and this fund is one of the great legacies to come out of it,” Mr Hinchliffe said.

“The Palaszczuk Government and the Australian Football League each put $4 million into the AFL Grand Final Facilities Fund.

“To grow the game, quality field lighting, change rooms, ovals and irrigation are being rolled out at community AFL clubs across Queensland.

“These projects are co-funded by clubs themselves to qualify for Grand Final legacy funding and encourage community ownership of upgraded football infrastructure.”

Trish Squires from AFL Queensland said the Grand Final Facilities Fund had been welcomed by community clubs around the State.

“It allows our team to work with clubs through the planning, funding and delivery phases to ensure club facilities are fit for purpose,” Ms Squires.

“We know having safe and inclusive facilities is crucial to attracting and retaining players all of which helps to build healthy, active and welcoming communities.

“With more people playing AFL in Queensland than ever before, there is still much work to be done.

“We are an inclusive sport, our female pathways run from NAB AFL Auskick through to AFLW.”

The AFL Grand Final Facilities Fund is supporting jobs with a pipeline of infrastructure to 2024.