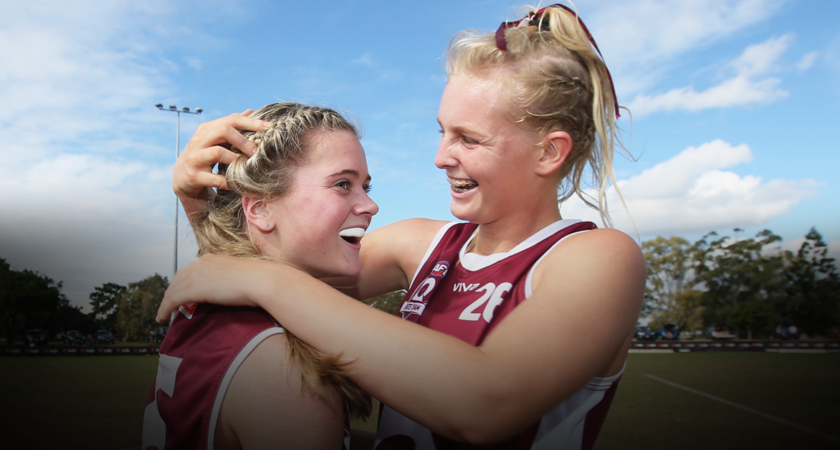 AFL Queensland is pleased to announce the squad for the 2019 Bond University Under 18 AFL Women’s Queensland State Academy.

The 33-player squad will compete in two games against West Australia in Perth next month followed by the NAB Under 18 AFL Women’s National Championships on the Gold Coast in July.

The squad was chosen following two trial games between the Brisbane Lions and Gold Coast SUNS Academies in April and the Northern States Academies Carnival held in Coffs Harbour over the weekend.

“The squad we have selected is very strong and possesses great depth throughout with players capable of playing multiple positions on the field,” Newman said.

“The quality of the team is a credit to their junior coaches and the Brisbane Lions and Gold Coast Academy coaches that have worked with these girls to get them to this stage.”

The squad contains ten NAB National Academy players including three who have already been signed to the Gold Coast SUNS list for the 2020 AFL Women’s season, Ellie Hampson, Kitara Whap-Farrar and Charlotte Hammans.

Eight players from North Queensland, including Kitara Whap-Farrar, Tiarna Ahwang and Wallis Randell, who have already relocated to the Gold Coast, also feature in the squad, highlighting the rich talent pool in the state’s north.

The Academy squad also features 13 players recently selected for the QW Winter Series for either the SUNS or Lions.

AFL Queensland would like to thank the Academies and regions for their efforts and dedication throughout this selection process.

The full list of players selected for the squad are outlined below.

Selected players in the squad are required to fill out this link before training on Wednesday night at Leyshon Park, Yeronga, commencing at 5:30pm.