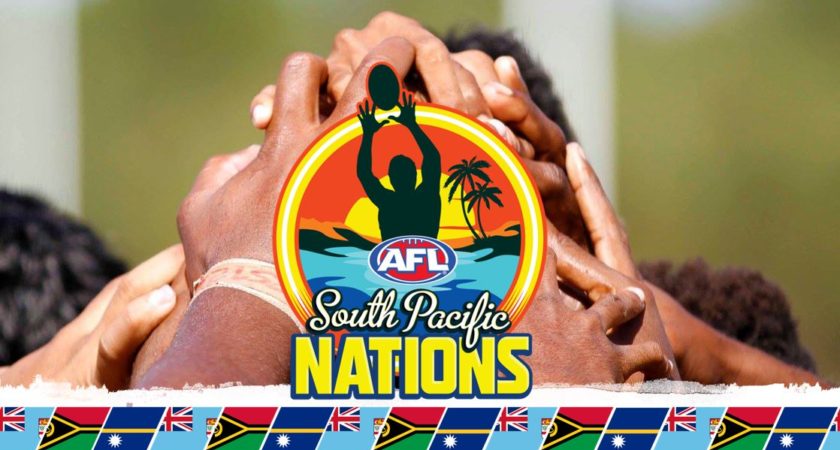 Next week, the south Pacific’s best and most promising young footballers from four different teams will all converge on Suva’s Albert Park for the 2018 Under 15 Youth Oceania Cup.

Defending champions Fiji will be eager to defend their crown against teams from across the region including Nauru, Vanuatu and a combine Pacific All Stars team.

Following selection to their respective national teams for the Oceania Cup, each player can then be considered for selection in the AFL South Pacific Talent Camp which will be held in Lismore in April 2019 in conjunction with the Gold Coast SUNS.

Up to 15 players from the carnival will be invited to take part in the talent camp next year alongside up to 15 invitees from Papua New Guinea. All South Pacific players are eligible to continue along the Queensland talent pathway all the way to the Queensland Under 16 representative state team.

With AFL clubs now allowed to offer up to eight International Scholarships, which provide each player the opportunity to play at the highest level, the 2018 Under 15 Youth Oceania Cup will give the players a chance to stake their claim.

Participation in the Pacific region continues to grow and ensure this year’s Oceania Cup is the best and most competitive yet. In 2018, participation once again exceeded 150,000 participants; 45% of whom are female. As a result, two youth girls exhibition matches will be showcased throughout the six day event.

AFL Development Manager – South Pacific Ben Drew said the carnival welcomed each nation to Fiji’s capital and highlighted the importance the Cup plays in the development of footballers from the region.

“The AFL Youth Oceania Cup plays an integral role in showcasing the many talented players from Fiji, Nauru, Tonga, Solomon Islands and Vanuatu, he said. I thank all staff and volunteers for their efforts in ensuring teams and players arrive safely and are ready to compete.

“I would also like to extend thanks to the Fiji Naitonal Sports Commission for their ongoing support of the Youth Oceania Cup.”

“This tournament is a major part of our International Talent Pathway, which provides the opportunity for males and females to fulfil their dream and play AFL at the highest level.

Alas, let’s take a look at this year’s teams.

The defending champions find themselves on home soil and look to keep the Oceania Cup firmly on their shores. Over the past two months, the Junior Tribe have been honing their skills at training in anticipation for their title defence and have placed a specific focus on competativeness around the contest and being able to consistently execute the basics. Led by three-time national captain, Alipate Savaii Navuso along with a combination of experienced and new players, Fiji will again be among those vying for the title once again in 2018. Key players to watch from the Junior Tribe include Inia Rabuku, a strong, marking forward and tackling machine Meli Vula.

Having fallen agonisingly short in 2017, Nauru looks poised to make a genuine title tilt this time around and has used their national domestic junior competition to select the best side available for the Oceania Cup. AFL Nauru has continued their commitment to grow and develop the game on the island from grassroots to senior levels, and the terrific results will undoubtedly hold them in good stead for the carnival. With a new comittee led by Leona Cain, the Stars are in a wonderful position as the nation celebrates 50 years on independence. This year, a bevy of young players will represent the Stars at the Oceania Cup, including uncompromising midfielder Innocent Raidi and rebounding defender Billyboy Capelle.

Vanuatu will field a team for the second consecutive season in 2018 following their successful return to the Oceania stage last year. Over the past three months, the Volcanoes have been training hard in preparation for next week and could emerge as the dark horse of this year’s carnival. Under the tutelage of Lent Tevi and Ryan Bonga, along with the support from former Werribee VFL Head Coach John Lamont, the Volcanoes have been exposed to some of the best coaching available which could ultimately give them the edge over other teams in the Cup. Among the Volcanoes ranks are exciting players such as Suley Knox Takl – a dashing half-back with great athleticism – and Charles Kennedy – a strong wingman who is clean in disposal.

The South Pacific All Stars are a combination of players from across the South Pacific region with the majority of players coming from Fiji. In the past, the All Stars have contributed consistently throughout the Oceania Cup and have produced several players who go on to play for their respective countries the following year. The South Pacific All Stars provide a terrific opportunity for players who may be emergencies for their teams to play throughout the carnival. Despite only taking up football recently, Benaiak Seru looms as a key pillar of the All Stars lineup in 2018 alongside Donald Makioto, who possesses terrific shut down speed in the defensive half.