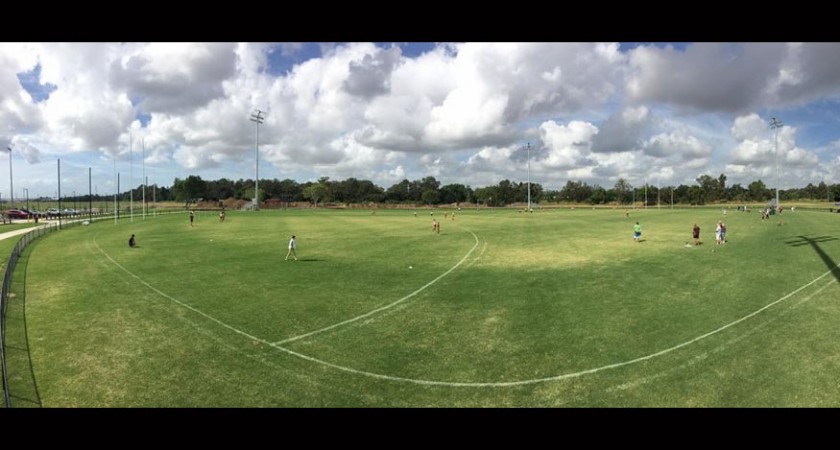 Treasurer and Minister for Sport, Curtis Pitt said the Queensland Government had contributed $1,000,000 towards the major upgrade project under Round 1 of the Get Playing Plus program.

“Stage one of this project included the construction of a senior AFL field, field lighting, roads, car parking, pathways, irrigation and landscaping.

“Aspley Hornets is the largest AFL club on the north side of Brisbane with 440 junior members, 27 youth girls (under 15) and 25 registered senior female members.

“The club also boasts three senior male teams, plus one team in the North East Australian Football League (NEAFL), with the senior women’s team set to run out onto the newly completed fields for the first time this Saturday 30 April, against Pine Rivers.

“This is an exciting day for women’s AFL with the precinct considered as a centre for female football, providing top class facilities for women’s sport, showcased with two Queensland Amateur Women’s Football Association (QWAFA) games scheduled.

“I would like to congratulate Moreton Bay Regional Council, Aspley Hornets and the state body, AFL Queensland , for getting this project off the ground,” Mr Pitt said.

“One in every three Queenslanders playing Australian Football is female, with over 71,000 women and girls playing some form of the game last year,” said AFL Queensland CEO Dean Warren.

“Female participation increased by over 37 per cent in 2015 with figures set to boom again this year.

“This facility is vital in supporting this growth and providing community access, and we thank the Queensland Government for their continued support.”

Minister Pitt said with stage 1 now complete, the club and its members can look forward to the commencement of stage 2 which will include a multi-use clubhouse with storage, meeting and office space, kitchen, canteen, function room, ancillaries and gymnasium.

“With project completion set for the end of the year, the South Pine Sports Precinct is set to become one of the best equipped facilities in the region, something the whole community can benefit from.

Get Playing Plus provides grants up to $1.5 million for approved new or major upgrade projects that assist in the development of places and spaces to increase participation opportunities.

It is one of four funding programs that make up Get in the Game, an $82 million government initiative to support grassroots sport and recreation.

For more information on Get in the Game, visit www.npsr.qld.gov.au/getinthegame