The 20-hour journey for a game of footy 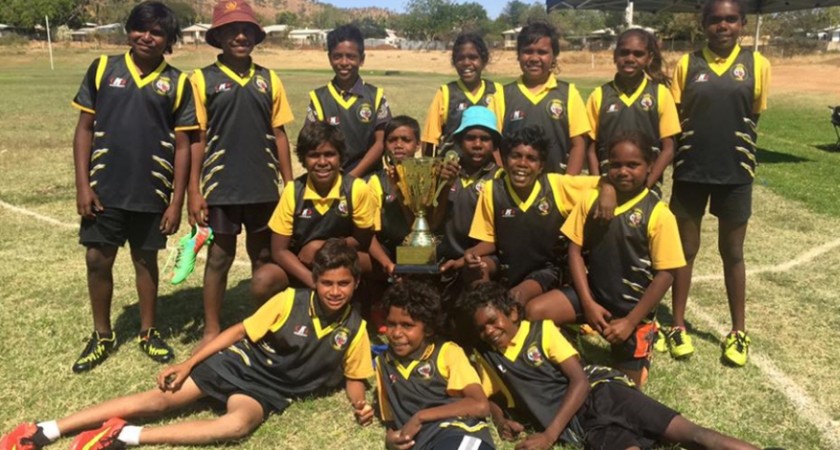 That team is Sunset State School, who will travel a whopping 10 hours from Mt Isa to Townsville to compete in the new premier schools competition.

Sunset, who will compete in the Primary Boys Division, are one of 384 teams across three age divisions who will battle it out to be crowned state champions.

A 20 hour round trip with 40 odd kids presents more than its fair share of challenges; so why do it?

“Because we are a school of 90 per cent indigenous kids, we try and take them away with any sporting opportunities that we can,” says Joel Crow, the teacher behind this extraordinary effort.

At Sunset, it’s not just a matter of picking a team and having a few training sessions.

“We try and link it to our schools attendance. We use it as a bit of an incentive to a kid coming to school and trying their best. That way they can get into the team, so it’s a bit of a bonus for them to come and travel with us,” Crow said.

“Once we pick the team, there will be a couple of training sessions a week until we leave.”

Then comes the big day.

“We’ll try travel in one day. It’s a full day on a bus with 40 kids, so it’s an absolutely massive trek. It’s a rough trip with the kids but usually they are pretty good at it,” Crow said.

“Some of them have done it before which will help, but there will be a few news ones, and probably a couple of bus sick kids.”

When the bus pulls into Tony Ireland Stadium, it will be game time.

Those 60 minutes will be less daunting than the journey itself.

Despite winning their local competition last year, it will be a fresh-faced Sunset’s team.

“A few of the said to me they had never played footy but all wanted to try out for the team,” Crow said.

They might be a little down on experience, but that doesn’t impact on enthusiasm.

“In the school there is a huge buzz. It’s huge for them,” he said.

“I don’t hold any massively high hopes for us going over there and winning or anything, but there always is that chance,” he said.

“I just want the kids to have a great time and do their best.”

“A few of the other teachers at other schools are looking at jumping on board as well to come to Townsville. If we could get a few more schools over there that would be fantastic,” Crow said.

“It’s an heroic effort; it’s amazing that they are willing to travel that far to play in the Schools Cup,” Anderton said.

“The school and the teachers deserve a big pat on the back for what they are willing to do for these kids.

“I think there will be more than a few people hoping to see them do well.”

There is no such thing as too far for Sunset.

“We will travel as far as it takes to get some of these kids recognised. Say we win this tournament, and they say the next one is in Brisbane or something, we will go their in a heartbeat with the kids,” Crow said.

All this wouldn’t be possible without ‘Mr. Crow.’

“I’m only here for the kids. The smile on their face when they come to school, put in the effort on the sporting field, it’s really, really good to watch, seeing them grow on and off the field.”