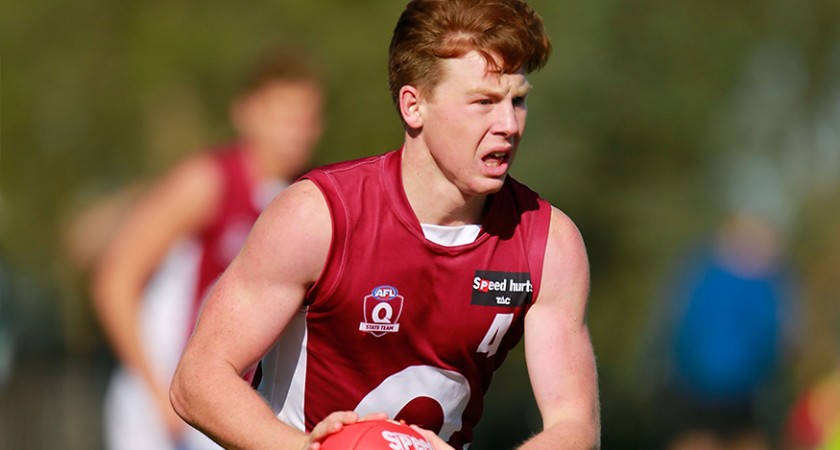 On Tuesday night, Eric Hipwood, Ben Keays, Corey Wagner and Wylie Buzza were all selected in the NAB AFL Draft, earning a spot on an AFL senior list.

Seven members of the Queensland State Academy, the team which took out the Division Two NAB AFL Under 18 Championships, where drafted, while the other four were picked on the back of their form in the NEAFL this year.

Six of the draftees this year were members of the Hyundai Help for Kids Brisbane Lions Academy, while one, Jesse Joyce, was a Gold Coast SUNS Academy product.

The draft class of 2015 included Mabior Chol and Reuben William, two players who were born in Sudan before migrating to Australia with their families.

In one of the most remarkable stories of the draft this year, both Wagner brothers will play out their AFL dream next year despite being three years apart in age.

North Melbourne selected Corey, 18, at pick 43 in the NAB AFL Draft, and Melbourne picked up Josh, 21, with pick six in the Rookie Draft.

The good news didn’t stop there for Queensland with Samuel Reid, who grew up on the Sunshine Coast, re-entering the AFL system after two years, selected by GWS.

Collingwood has also re-rookied both Josh Thomas and Lachlan Keeffe.

“Today was a fantastic day for football in Queensland, and a reflection of how strong the game is becoming up here,” Browning said.

“As usual in Queensland, everyone plays a part. Whether it is a school, the staff putting in the extra yards, or the clubs and academies themselves, they have all played a role.”

“The most pleasing thing for me was the amount of different clubs that have taken Queensland talent, and are engaged in the Queensland market, and have respect for it,” he said.

“To me, I took great enjoyment out of the boys from the NEAFL getting drafted. I am rapt with the two Sudanese boys in Reuben and Mabior getting picked, which is a great story from football, and a testament to the amount of work clubs like Yeronga, Zillmere and everyone involved has done, which should be recognised.

“And of course, it is great to see so many players get picked directly out of the two Academies.”

While the draft results in 2015 were fantastic, Browning hinted 2016 could be even bigger.

“Next year is probably going to be even more exciting.”