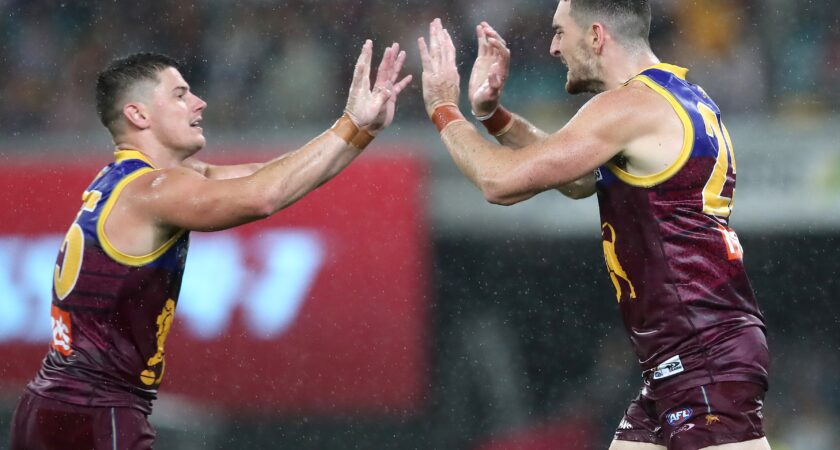 Dayne Zorko added another line to his impressive AFL career record last weekend as he reminded AFL fans across the country what a bargain pick-up he has been for the Brisbane Lions.

The Lions skipper became just the seventh Queenslander to top 4000 career possessions when he collected a season-high 26 possessions in a water-logged Round 5 slog against Essendon at the Gabba to take his career tally in 190 games to 4010.

It was the 32-year-old midfielder’s 192nd game in a career in which he has made a mockery of his pathway to the Gabba after he was overlooked four years in a row in the National Draft from 2007-10 as an aspiring youngster playing with Broadbeach in the Queensland competition.

The four-time Broadbeach Best and Fairest winner eventually joined the AFL in the 2011 National Draft, claimed as a zone selection by the Gold Coast Suns and traded to the Lions for selection #34.

It was a selection that eventually made its way to Geelong and gave them South Fremantle youngster Shane Kersten, who played 37 games for the Cats and 29 games for Fremantle in a career which finished in 2019.

In the same draft the Gold Coast took Henry Shade from North Hobart at #24 and Queenslanders Alex Sexton and Jackson Allen.

From the AFL Class of 2011 Zorko has played more games than every player except Brandon Ellis, originally drafted to Richmond and now at the Suns. He has played 197.

And he ranks sixth on a possession count for 2011 draftees headed by Adam Treloar, an original signing to the GWS Giants and now at the Western Bulldogs after time at Collingwood. He has 4975 career possessions.

With 192 career goals, Zorko also is ranked fourth on a 2011 draftees goal list headed by inaugural GWS full forward Jeremy Cameron, now at Geelong. He has 427.

Also ahead of Zorko are inaugural GWS signings Josh Bruce and Toby Greene and Chad Wingard, now at Hawthorn after starting at Port Adelaide. Wingard has 264 goals, Bruce, another specialist full forward now at the Western Bulldogs after time at StKilda, has 202 goals, and Greene 197.

To rub further salt into the wounds of the Suns, Zorko’s career games and possession totals head the corresponding figures for every player originally drafted by the Suns 12 months earlier. The best of those has been Dion Prestia, now at Richmond. He has played 167 games for 3984 possessions.

Of the original Suns playing list, only key forwards Tom Lynch, now at Richmond, and Charlie Dixon, now at Port Adelaide, have kicked more goals than Zorko. Lynch has 359 and Dixon 254.

Zorko, under fire in the media for a slowish start to the season, returned to something like his best against Essendon as the Lions got their season back on track against Essendon.

Also last weekend, the Suns Lachie Weller topped 2000 career possessions after picking up 18 against the Bulldogs.

In other Queensland highlights from Round 5:-

Adelaide’s Ben Keays had a career-best 31 possessions in his side’s loss to Fremantle. He is now 24th in the League for possessions this year and second at Adelaide behind only Rory Laird.

Port Adelaide’s Aliir Aliir was the only Queenslander to figure in the coach’s votes. He earned five votes for his 17 possessions in an outstanding defensive effort against Carlton.

Sadly, after such a brilliant start to the season, Sydney ruckman Tom Hickey suffered a knee injury late in the game against GWS that will sideline him for about six weeks. GWS’ Sam Reid, returning from a two-match suspension, faces a fortnight out of action with a minor hamstring injury.