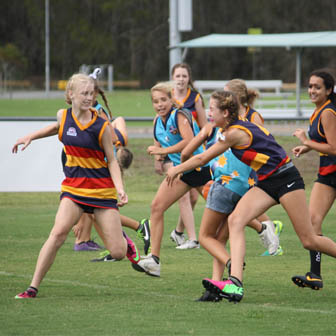 With 13 schools, 32 teams and 350 participants, this year’s AFL Sunshine Coast Youth Girls Cup was bigger than ever.

The AFL Sunshine Coast Development team had their work cut out for them with 16 senior and 16 junior teams fighting it out for regional bragging rights and the opportunity to represent the Coast at the South-East Queensland Youth Girls Cup Carnival in Brisbane.

AFL Sunshine Coast Regional Manager, Paul Tresise was thrilled when the school nominations started rolling in for the day several weeks prior.

“Honestly, when the online nominations started coming in I wasn’t surprised as there is a huge demand for Youth Girls footy on the Coast, especially on the back of the AFL Sunshine Coast Junior League now having Under 15 and Under 18 Youth Girls Competitions,” Tresise said.

“The day was massive in terms of catering for such a large mass of participants but our staff were really well organised in delivering a quality program.”

With 16 teams in both the junior and senior divisions the teams were then split into four pools within their divisions to ensure all teams played at least three games of footy.

In the junior division Mountain Creek SHS, St Teresa’s Catholic College team one and both of the Maroochydore State High School teams made the semi finals to play for a spot in the grand final.

Unfortunately for St Teresa’s they could not overcome Maroochydore for a second time, with Maroochydore State High School claiming the junior title.

In the senior division four schools had the opportunity in the Semis to contest the Grand Final with Mountain Creek SHS team one, Caloundra SHS, St Johns Catholic College and Coolum SHS all finishing on top of their respective pools.

Mountain Creek were eager to defend their 2013 title and overcome a strong Caloundra outfit for a place in the Grand Final against Coolum who defeated St Johns.

With no bench, the Coolum team flexed their muscle and were too strong for the Creekers in a tough final contest.

Best of luck to the Maroochy Swans and Coolum when they travel down to Brisbane.

If you are interested in playing Club Youth Girls Footy on the Sunshine Coast this season contact your local club listed below for further information: