Young stars to shine in Townsville 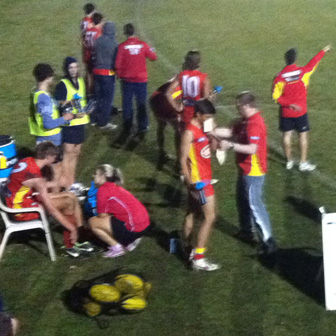 In the lead-up to the Brisbane Lions vs. Gold Coast SUNS NAB Challenge match, some of the state’s rising stars will be on show at Tony Ireland Stadium.

A Gold Coast SUNS Academy North Queensland v Central Queensland match on Saturday, February 22 will be the culmination of a three-day Academy Camp in Townsville.

Players will come from the four regions in the North Queensland zone, ranging from Rockhampton to Cape York, for the camp, which will focus on education and player development.

Plenty of trained eyes will be on the contingent during the camp, with SUNS Academy manager, Jason Torney, and head coach, Aaron Rogers as well as Queensland U18 coach, Adrian Fletcher as well as key regional staff all attending.

Most of the players have been with the SUNS Academy from Level One, at Under 14 level, and Torney said it would give them a great opportunity to prove how far they’ve come.

“These players have progressed through each level from U14, through to U16 and U18 and I’ve seen them develop,” he said.

“Each region has a lot of talent and these games give boys opportunity to display that.”

Torney said each player would receive feedback on their strengths and areas to improve through the weekend.

“We’ll be reviewing individual development plans and helping players get their heads around what they need to improve going forward, and what they’re doing well,” he said.

“There’ll be guest speakers on leadership and professionalism, and the whole camp’s based around self-motivation.

“Being in that camp environment, having to perform and play at an elite level gives them a great experience.”

Most will be the Academy’s Level Three players, but a select few Level Two (U16) have been selected, including Cairns prospect, Jack Bowes, an U15 All-Australian player who has proven form in high-level matches.

Following the match, players will be selected to travel to South-East Queensland to represent the Academy against the Lions Academy as part of state U18 trials.

The Academy Camp is part of the NAB Challenge weekend in Townsville, with the Brisbane Lions playing the GC SUNS on Sunday, February 23 at Tony Ireland Stadium.

The Gold Coast SUNS Talent Academy is a multi-level coaching program for aspiring players aged between 12 and 18 years.

It forms a key stage in the pathway from junior sport through to a possible career as an AFL player at the highest level – without leaving Queensland.

The Brisbane Lions vs. Gold Coast SUNS NAB Challenge game kicks off at 3:40pm on Sunday February 23 with tickets on sale through Ticket Shop www.ticketshop.com.au

The 2014 NAB Challenge match in Townsville is supported by the Queensland Government through Tourism and Events Queensland as part of a growing calendar of sporting, cultural and regional events throughout the state.