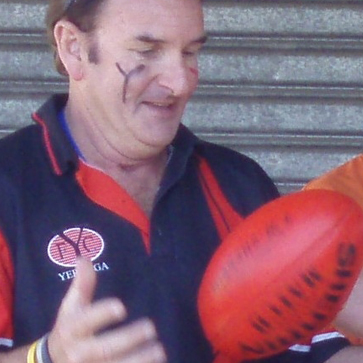 It is with great sadness we acknowledge the passing of Lloyd “Supercoach” Bates from Yeronga Football Club, a passionate supporter of Senior and Youth Football in Brisbane. Lloyd passed away in the early hours of Sunday 12 December due to a heart condition.

Lloyd was introduced to the Yeronga Football Club during the 2000 season.  He was training with a SuperRules team, and having recently moved to Queensland from Victoria, wanted to be a part of a local football club.  He enjoyed the camaraderie and socializing he encountered at Yeronga, and was immediately eager to provide assistance to the Club wherever it was needed.  Lloyd had played at major role in the activities of his Victorian club, and so, was keen to play a part with Yeronga.  In 2001, Lloyd filled an Assistant Senior Coach role.  Over the following years, he would also act as the Reserve Grade and Third Grade Coach.  Throughout the decade, Lloyd provided great assistance in many roles to many of Yeronga’s teams.

Lloyd became involved in youth football when his daughter Emily started playing with Yeronga Juniors in 2006 in the inaugural U13 youth girls competition.  In 2007, Lloyd coached the Yeronga U12 youth girls team to a Premiership.  In 2008, he was appointed Coach of the U15 girl’s team which went on to win all 3 Premierships to 2010.  Lloyd was also the founding Coach and driving force in 2010 of the Western Thunder U18 girl’s team, which he built to be the dominant team of the competition.  He also supported SE Queensland U16 girl’s state representative teams at the Cairns carnivals in 2006-2010 assisting with coaching and other activities.  His passion and support within Yeronga and the Brisbane Juniors gave girls the opportunity to participate in our great game with respect from the football community.

Lloyd was adored and respected by all his senior and junior players, many of whom had not played football before.  His depth of knowledge, passion for the game, depth of tolerance and humour was essential to his success with these inexperienced players.  To many in the seniors he was a mentor and friend.  With the girls, his approach was vital to their football development.  He was always supportive and encouraging and asked all that players give the best.  Amongst his many nicknames, his players called him “Supercoach”, a reflection of the bond between players and coach.

Lloyd was also involved in the management of the Senior Club by becoming a member of the Committee for two years.  He was consistently a great supporter of all activities and events of the Club, with a great interest in Yeronga’s wellbeing and future.  He was always quick with a story or a joke – and was renown amongst the players as being an enthusiast of the “End Of Season Trip”.

Lloyd was such a positive contributor to the pursuits of the Yeronga Football Club over the past decade that the current Committee had discussed his nomination for Life Membership shortly before his passing.  Even as recently as the past week, Lloyd was enthusiastically discussing plans for the 2011 season, excited to see both the Senior and Junior Club perform well at the redeveloped Leyshon Park.

Lloyd’s loss is a devastating blow to the Club, and all than knew him.  Our thoughts and prayers go out to Julie, Emily, Rachael and Sarah.  Yeronga Football Club encourages support for the family during this difficult time.