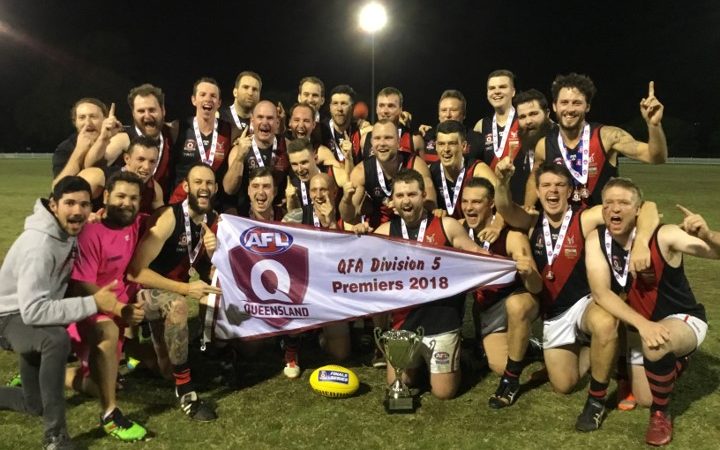 Yeronga South Brisbane’s Cinderella run in the QFA Division 5 competition was completed on Friday night as the Devils claimed a stunning 36-point win over Aspley to claim the premiership.

The Devils started the season with just three wins from their opening eight games but ended their campaign on the back of 12 straight wins, culminating in one final victory against the Hornets at Bendigo Bank Oval.

In what was likely the biggest ever crowd for an AFL Queensland Friday night competition, Yeronga stormed out of the blocks, and kept their noses ahead to claim the premiership despite a gallant fightback from Aspley.

A crowd of 1000 estimated fans attended the game at the newly refurbished Bendigo Bank Oval to witness the event.

The opening few minutes were a tense affair as both sides looked to assert themselves in the contest and it was Yeronga who found their groove quickly.

Devils wingman Heath Hart emerged early as one player likely to have a significant impact on the game as he used his running ability to gain yardage and drive Yeronga forward.

The Devils hit the scoreboard early including the game’s first from Matt Johnson as the side raced out to a 19-point lead at the first break. Aspley went goalless in the first stanza; only registering a solitary behind.

Dougal Middleton extended the Devils’ lead early in the second before two long bombs from Aspley veteran Matt Argus asserted the Hornets in the contest.

A tense third quarter ensued as both sides looked to cap off remarkable seasons in the Division 5 competition.

Former NEAFL player Michael Hutchinson rose to the occasion and led from the front in the third but was met by a similarly gallant effort form Yeronga’s Wade Hurst.

The Devils made life tough for Aspley, who were seeking a premiership in just their first season in the competition, as the away side kicked the opening three goals of the premiership term to open a 33-point deficit.

The premiership celebrations were kicked off late in the term as Heath Hart capped off a stunning three-bounce run with a major in the shadows of three-quarter time.

Aspley failed to compile back to back goals as the northside club struggled against a stout Yeronga defence.

The two sides traded goals in the final term before the Yeronga faithful erupted on the final siren as the Devils were crowned premiers.

Heath Hart, who finished with two goals in the game, was awarded the game’s best on ground medal.