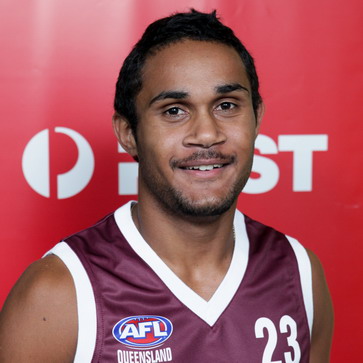 Peter Yagmoor had a fantastic mini-holiday planned last weekend after a long and taxing campaign with the Australia Post Queensland Scorpions in the NAB Australian U18 Championships.

He had a free trip home to Cairns to catch up with family and friends and tickets to the historic first AFL game at Cazaly’s Stadium between the Gold Coast Suns and the Richmond Tigers.

It couldn’t get any better for one of the shining young lights of Cairns football.

But it did. Much better.

Yagmoor, fresh from an outstanding carnival with the Scorpions, was a late inclusion in the Suns Reserves side for the Cazaly’s curtain-raiser against the NT Thunder.

He had all of about three hours’ notice that he was playing, but by the time the final siren blew he’d left an indelible impression on the Suns coaching staff and, no doubt, other AFL recruiters.

“I’d gone up there with the Suns but on the Friday night (Suns Reserves coach) Shaun Hart told me they had enough and I wouldn’t be playing,” Yagmoor explained.

“He just told me to have a rest and enjoy myself and I was happy with that. It was great to catch up with my Dad and other friends in Cairns.

“But at breakfast on the Saturday morning Shaun told me I’d got a late call-up. I was rapt. It was a great opportunity to play in the Suns side again, especially in my home town.”

The Suns, sitting second on the NEAFL Northern Conference ladder heading into last weekend, were savaged by injuries in the first quarter and finished up on the wrong end of a one-sided scoreline against the top-of-the-table Thunder.

But Yagmoor, a registered Morningside NEAFL player, made the most of his opportunity and was named fourth best by coach Hart.

“He was competitive throughout, he was clean at ground level and he used that beautiful left foot he’s good really nicely whenever he got the opportunity,” Hart said.

“It a difficult situation, playing with a side that was playing poorly, but his effort throughout was very polished. We only had four decent players but everything he did he did well.”

Hart used Yagmoor mainly across half forward, with an occasional run on the wing and at half back, and even in the centre square, and he didn’t look out of place at all.
His standout homecoming earned him the Round 16 nomination for the NAB NEAFL Rising Star Award (Northern Conference).

He is the second Scorpions player behind Redland ace Sexton to win a Rising Star nomination via the Suns Reserves and the third Morningside player behind Peter Mollison and Tom Bell to find himself in contention for this prestigious award.

The game against the Thunder was Yagmoor’s third for the Suns Reserves this year after he played with them in the first two rounds of the NEAFL season, and represents another chapter in a long football apprenticeship.

Having moved from Cairns to Brisbane in 2008 to finish his schooling at St.Peter’s College under an AFLQ-funded Michael Voss Scholarship, he’d played three games as a 15-year-old top-up player with the Brisbane Lions Reserves late in the 2009 season.

He made his senior QAFL State League debut for Morningside in Round 5 last year before dedicating himself to the Scorpions’ campaign, and played with the Panthers again in Round 8 this year.

He’d enjoyed the taste of senior football, but never before like last Saturday.

“I remember that game for the Lions – I was a quiet, shy kid who sat in the forward pocket and tried to get the ball without yelling,” he said.

“This year has been different because I did a fair bit of pre-season with the Suns so I knew all the boys and how their game plan works.”

Yagmoor had joined Scorpions teammates Sexton, Jackson Allen, Sam Michael and Aaron Laskey in spending time with the Suns from last November through until early February.

“It was a great experience – it has really helped my football this year and my workrate has especially improved,” he said.

Certainly, a good pre-season has bolstered his overall performance this year, and insiders say he ranked second to Fraser Thurlow in the Queensland Most Valuable Player Award at the Australian U18 Championships.

The 179cm 17-year-old left-footer had no hesitation in nominating the Scorpions win over the Northern Territory in game five of the championships section of the carnival as his highlight.

“It was Queensland’s first win in three years and all the boys were really excited. At training the next week the standard really went up and it was just a good feeling,” he said.

Yagmoor was a most consistent performer throughout the Scorpions campaign, impressing with his decision-making, his coolness under pressure, and his raking left-foot kick, as he caught the eye of AFL scouts across the country.

“That’s the long-term dream – I’d love to play in the AFL – but I know I’ve got a long way to go,” said the well-spoken and level-headed youngster, who finished Year 12 at St.Peter’s last year and is now living and working part-time at the school.

“They’ve been great to me – it’s a fantastic school,” Yagmoor said of what has become his home away from home, and where he was Sports Captain last year.

“I really loved school and it was great that I’ve been able to stay there this year. I love coaching so I do a bit sports coaching at the school and a bit of boarding house supervision.”

A young man of outstanding character, Yagmoor was an All-Australian U15 Schoolboys selection in 2005 and in 2007 toured South Africa with an Indigenous All-Stars side, visiting Johanneseberg, Pretoria and Cape Town in what he described as “a trip of a lifetime – even though we played on fields with virtually no grass”.

It’s all been about the AFL dream, ever since his junior days at Cairns City Cobras, North Cairns Tigers and Kenmore Bears before he joined the Morningside Panthers.

And he’s certainly not getting ahead of himself despite his share of attention in recent weeks.

“My endurance is OK but it’s nothing like professional standard – I know that’s something I’ve got to work on over the next couple of pre-seasons. And my body strength needs to improve if I’m going to compete with bigger bodies,” he said.

“That was the good thing about spending time with the Suns during the pre-season – I got to see the standards that are required to play at that level.

One thing that doesn’t need a lot of work is his thumping kick. It’s already AFL standard.

“I’ve got my Dad to thank for that – he taught me to kick in the backyard as a kid and spent hours kicking with me every weekend,” Yagmoor said of his father Tony, who combines his role as No.1 mentor with No.1 fan and No.1 mate.

“He’s done everything for me – on and off the field he’s been fantastic. I can’t thank him enough. I don’t see him too often but he’s always there whenever something important is happening.”

Yagmoor, like the bulk of this year’s Scorpions side, is eligible to be taken by the Suns as a Queensland zone priority selection ahead of the 2011 NAB AFL Draft – just as 2010 Scorpions teammates Joel Wilkinson and Tom Hickey were last year.

But despite his recent time with the AFL’s 17th franchise there’s no challenging his life-long loyalty to Carlton.

“I’m a massive Blues fan,” he admitted, having identified Chris Judd as his childhood hero in this year’s Scorpions Player Profile, and declared Jordan Russell as his favorite player “because of the hard work he’s done to get him to where he is today”.