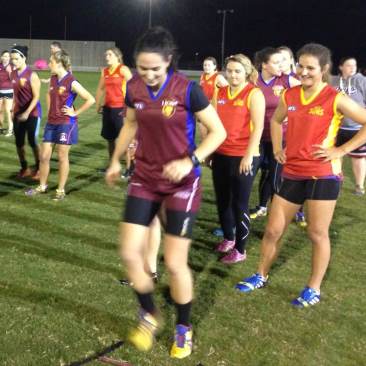 The top 44 women to battle it out in next weekend’s Women’s All- Star match have been named, after two weeks of training.

This All-Star match will be part of a state triple header on June 8, and will double as selection for the Queensland team.

The successful players will fight it out for a spot in a standalone game outside of the National Championships, the first of its kind.

Players were nominated by their respective clubs, before attending training sessions, which ultimately decided the final squad.

It won’t just be the players in the spotlight at Burpengary, with coaching staff also vying for a job with the Queensland women’s side.

The all-star teams will be coached by Jo Butland (Cairns), Lauretta Dowling (Cairns), Damien Richards, Jacob Simmons-Bliss, Ron Kemp & Monique Lepri (SEQ), with all hoping to get a gig in Tasmania.

The All-Star Game will have representation from all six women’s league with the best players being selected from Cairns, Rockhampton, Mackay, Townsville, Darling Downs and Brisbane.

Queensland coach, Jeff White, said he was looking forward to seeing the state’s talent in the spotlight.

Twenty-three women will be selected to play in next month’s state match.

To be played against the TSL, the match will be a curtain raiser to the NEAFL v TSL match on June 21, part of the first interstate double header, featuring both men and women.

State of Play: Liam Dawson
QLD U18 up for TAC Cup challenge