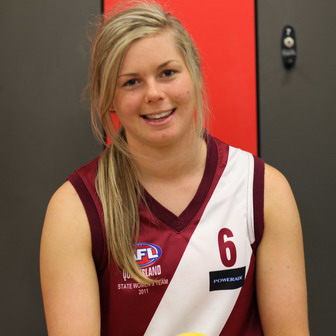 What does your role involve?
Increasing female participation within the Brisbane South East Region and giving females the same opportunities that male counterparts receive. As a player, setting a good example for the youth girls and playing at the highest standard possible.

How long have you been involved in AFL?
15 years

How did you first become involved in AFL?
I started in Auskick at age 5 and from there was encouraged to start under 8s. I filled in for my brothers team that year and loved it ever since.

What is the greatest challenge you have faced in your role?
A major challenge has been the transition from playing with the boys to playing in a smaller, less established competition with the girls. It makes me determine to expand youth girls football to allow young women the opportunity to play at a higher standard.

What have been your greatest achievements?
Two times All Australian and being apart of the Inaugural AFL-AIS Program.

What has been the most rewarding thing about working in football?
Seeing young players develop and grow into talented footballers.

Do you think being a woman helps you to bring a different perspective to your role and/or organisation?
Yes, definitely. A lot of people are surprised that females can actually play football the way we do, and also know so much about the game. Its nice to show people that we do have a product to put out there.

What do you find most rewarding about your role in football?
The many great friends you meet and being a role model for the younger girls.

What do hope to achieve in football?
I have a dream to be involved in a national female competition either as a player (first goal), strength and conditioning coach or eventually head coaching roles. I hope to also make All- Australian again.

Who inspires you and why?
My role model is Elise Perry. She inspires me because she is so talented and has played for Australia in both cricket and soccer. My father is also one of my biggest inspirations.

What advice would you give to other women hoping to work (or working) in AFL?
It is a fantastic and rewarding experience so get involved and make the most of it.

What do you see in the future for women in football?
I hope to see more women involved in football whether it be players, spectators, coaches  and women in higher positions within the AFL. I believe there will be a national competitions for females to play in, with teams aligned with every AFL club.

What is the most important attribute in a leader?
I think a leader should be approachable and have good communication skills, as well as the ability to lead by example.