Winging it; Women’s Round 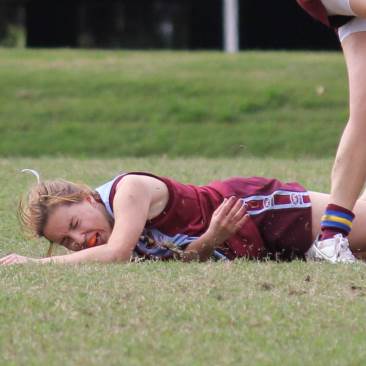 So, I was struggling for ideas this week for my blog.

I discussed the bye last week, which in hindsight was poor planning, considering there was no game to talk about this week.

Having grown up as a pretty big footy fan, I have never felt out of place at an AFL match or in a community footy match.

Now, with a little bit of experience in the playing side of footy, it is great to see how quickly women’s footy is growing in Queensland and around Australia.

Just last week, Cairns hosted the women’s nationals, showcasing some of the best talent in the country.

In the first half of our season, I have been blown away by many of my opponents’ skills and ability.

I remember my first few training sessions and plenty of the girls wondering whether there were any different rules for girls, in regards to tackling.

Gladly, there is not, and plenty of the girls go in just as hard as I’m pretty sure any boy could.

This season, the development of female footy culminated in the inaugural women’s draft, in which five current Queensland players were picked as well as two former SEQAFL players.

I’ve had the opportunity to speak to each one of these girls in the past five weeks, for work, and each of them is a credit to Queensland footy.

Each of these women are living the dream of many, getting to run out on the MCG and each is on the frontier of women’s footy development.

Just as significantly, though, is the chance for everyone to see how talented women’s footy players are.

As a fan, I have always been aware of the significant administration roles that women have, and the rise of umpires through the ranks, but for two AFL teams, in the Western Bulldogs and Melbourne, to help showcase the best talent we have.

It is great to see this happen and hopefully it is the start of a new era of women’s footy.

The best part about women’s footy is everyone plays because they love it.

And that’s what we all have in common.

In a week to mark the contribution of women in footy, I think that’s what it all comes down to.

Good luck to all the talented women playing on the MCG, in the curtain-raiser at Metricon or anywhere else this weekend.