Winging it: Switching it up 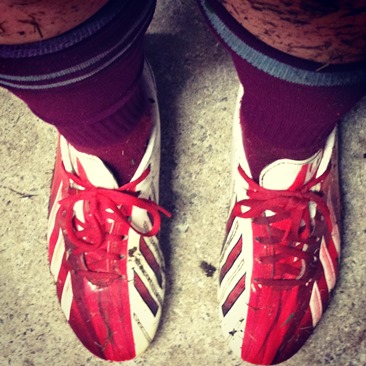 AFLQ community footy writer, Beth Newman, is pulling on the boots this season.

In fact, a lot can change in 20 – and as the black clouds rolled over the UQ oval last week, I got my first taste of wet weather footy.

Not just a bit of drizzle, but torrential, prickly rain, with a good dose of chilly wind.

And that was just the warm up.

When I saw the weather change, I wasn’t exactly optimistic, but as it turns out wet weather footy is actually pretty much the most fun I’ve ever had playing sport.

And, as it turns out, it was one of the best weeks of footy we’ve had.

As disappointing as our Zillmere game had been the week before, this was equally joyful.

The best part about it – I think I finally found my footy mojo.

Sometimes a change is as good as a holiday, and a switch from wing to back pocket certainly lived up to the hype.

While back pocket is typically a resting spot, when you’re an evolving/regenerating/developing/struggling side, any backline spot gets plenty of action.

Playing on the wing I generally spend a lot of time simply getting to where I need to be – in the back pocket,  I could time my run and tackle, and throw my intimidating physique around.

I’ve never really shied away from a contest, and on the weekend, I managed to outdo my own courage/lack of co-ordination, winding myself not once, but twice, by landing on the footy.

And as it turned out, everything came together for us all at once.

Hitting targets, laying hits and a good old dose of teamwork lead to our best half of the year, in which the score was only five goals to one.

I did have a bit of a Hayden Ballantyne milking moment, caught at the bottom of a pack, though.

Someone landed on my knee and immediately my mind went “ACL”- though, I doubt I would have been able to run it off in 30 seconds if that were the case (weirdly enough, not the most embarrassing part of my week).

The wet weather took its toll physically, there were lumps of grass everywhere from my socks to my mouthguard (don’t even ask), my jumper had turned to a dirty grey and I’m pretty sure the wet dog smell on my shoes is never going away.

Mentally, though, it was the best I’d ever felt, having nothing left.

And, as it turns out, it ended up being my own best game of the year, getting amongst the best six for the first time.

This weekend is our biggest game yet against Caboolture, at the nice and early time of 10am on Sunday.

Technology permitting, I will be strapping on a GPS and heart rate monitor for the game, so next week you will all be able to see exactly how little athleticism I possess.