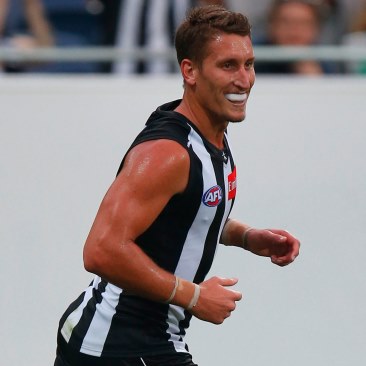 When Jesse White first came into the Queensland U18 squad, he knew there was room for improvement.

Eight years later, the 26 year-old looks fitter than ever as he prepares for to debut for his new club, the Collingwood Magpies.

Coming off his best season yet, White will be looking to make an immediate impact in the Magpies’ forward line.

White was one of the first players to come to AFL from basketball, an increasingly common switch among AFL players, and said that background certainly helped him pick up footy quickly.

“With the way AFL’s going now, it’s getting quicker and being a tall guy, you need to be agile and be able to sprint,” he said.

“Taking the skills I’d learned from basketball and putting them onto the AFL field, that really helped.”

White was back at his old stomping ground last month, for Collingwood’s pre-season training camp, visiting Southport, from where he was drafted.

The key position player was part of a bumper Queensland draft crop in 2006, which included a number of athletes from differing backgrounds, including Sydney’s Kurt Tippett (basketball) and Richmond’s Shaun Hampson (soccer).

White hopes that he and those who have followed him will encourage more kids to come across into AFL.

“I think if we can encourage more kids to play AFL, then great because they bring what they learn from other sports into the AFL,” he said.

Coming to Collingwood this season, White said the intense spotlight on the sport and its players was poles apart from his experience playing in Queensland and at the Sydney Swans.

“Growing up in Queensland and then going to a club that had a really good AFL culture but the state didn’t have a huge AFL culture, in Melbourne it’s insane,” he said.

“Everything you do on field, off field gets noticed and obviously you become more of a role model to a lot of the kids.