What we learnt at the Youth Girls State Champs 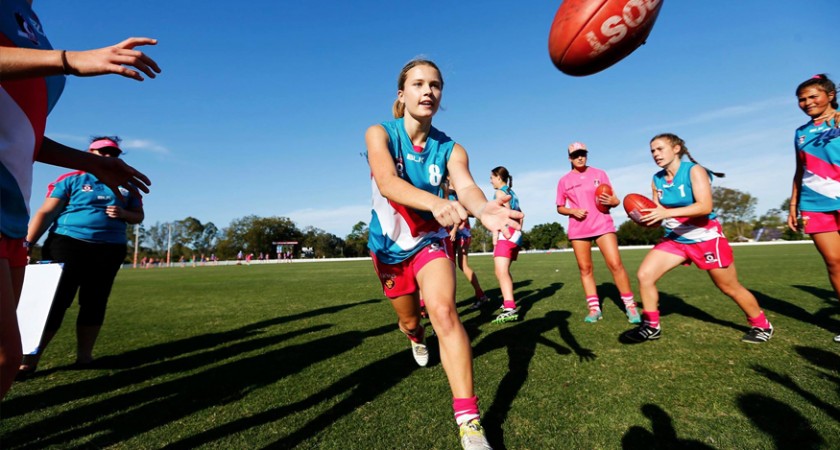 Four days of Youth Girls action wrapped up yesterday (link to results), and once again, it was a fantastic event.

Here is what we learnt:

Craig Starcevich and his team might have the toughest job in Australia this week: Good luck picking the Queensland Youth Girls Academy squad for 2017 with the amount of talent that was on display all weekend.

Courteney Bromage went to another level: She went into the Championships with a very high reputation, and it only improved. Gold Coast’s Bromage was named the Player of the Carnival after a stunning four games. She won a heap of the footy, was deadly by foot, and lifted her team. Keep an eye on her in the coming years.

The weekend was colourful: Whether it was the uniforms, the face paint, the hair ties, and even the boots, you will struggle to find a more vibrant footy tournament in Australia.

The footy was outstanding: Quick, open, skillful, played in the right spirits, and some corkers of goals kicked. Once again, the footy played topped the year before. The way the ball moved, and the targets that were hit were breathtaking. At times, you had to remind yourself that all the players were under 17!

PNG were milliseconds away from a thriller: In PNG’s first game of the Championships, deep into the third quarter they found themselves six-points behind Wide Bay. A long kick came into the forward line, a PNG player picked it up, took six steps, went to drop the ball on her boot from point blank range, and in that motion the siren went. Half a second earlier it would have been the finish of the week.  Footy is a cruel game sometimes.

The sun isn’t setting on Gold Coast’s talent: They went back-to-back , and they went through undefeated. The Sunsets are jam packed with talent, and has some serious depth in the group still eligible to play next year. Is there a footy factory down there?

The promotions: North Queensland (into Div 1) and Mackay (into Div 2) capped off their four days in perfect fashion, being promoted to the next division up after great campaigns. Both went through undefeated, so will definitely rattle a few cages next year.

Good vibes: Yes, the main focus was the results on field, but that doesn’t mean you can’t have a ripping time off it. From sipping on Boosts, to caricatures,  printing out your insta selfies, or sitting down with other girls from across the state listening to a few tunes, their was something for everyone at Yeronga. You only had to look at the smiles to see how much everyone was enjoying themselves. At the end of the day, that’s what it is all about, isn’t it?