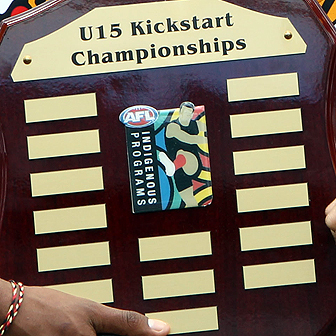 Western Australia have won back to back titles in the National Indigenous U15 Kickstart Championships, held again on the Gold Coast this week. After a slow start to the Championships with a one point loss to South Australia on day one, the team from the West won all remaining games and finished off with a convincing win over South Australia today by 20 goals.

The full score was Western Australia 23.16.154 to South Australia 3.7.25. Best on Ground in today’s Grand Final was awarded to Darnell Morrison from WA.

The Player of the Carnival was awarded to Northern Territory’s Ralph Dhamarrandji and the leading goal kicker was Kyle Jackson from South Australia.

The 2012 Flying Boomerangs squad was also announced following today’s Grand Final with 13 players from the winning team, and players from all States and Territories represented. The squad of 43 (listed below) will be cut to 25 to represent the Boomerangs at the under 16 national Championships in July and the international tour.