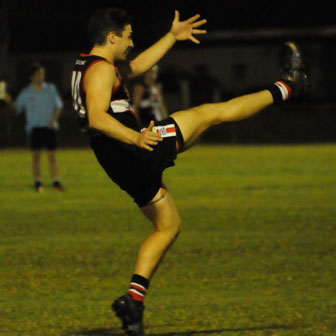 DESPITE not polling a vote until round 13, Saints full-forward Matt Walsh added another Crathern Medal to his list of achievements at last night’s AFL Cairns dinner.

The honour means he is the first player since Kevin Sullivan in 1988 to win it twice without doing so in consecutive seasons.

The prolific goal scorer, who broke his own record to finish with 134 in the home and away season, registered six best on rounds inside eight games to rocket past Adam Mueller, Lukas Ehlich, Adam Boone, Clint Guy and last year’s winner Brenton Powell.

Walsh, who also won in 2006, polled two votes in the final round to finish with 20, five ahead of North Cairns’ Mueller. Powell and Ehlich were equal third on 14 votes.

The surge coincided with Walsh’s incredible goal-fest at the back end of the season, which saw him kick 82 goals in seven games before breaking his own record with nine against Port Douglas in the final round.

Saints will play in Saturday’s final against North Cairns, whose captain-coach Kane Richter was awarded coach of the year honours.

Mark of the year went to Richter’s teammate Tom Clough for his effort under the lights against Manunda in the goal square earlier this season.And goal of the year was also won by a Tiger, young gun Isaac Rokey recognised for his snap from the sideline after beating two players, evading the boundary line and bouncing before taking the shot.

Walsh won the first-grade golden boot and Jason Wilkie (Port) and Leigh Jorgensen (Norths) both kicked 45 goals to share it in reserve grade.

Port Douglas president Andy Smith, who started the Crocs 25 years ago, was awarded a life membership while Tigers team manager Kim Tennick won the volunteer of the year.