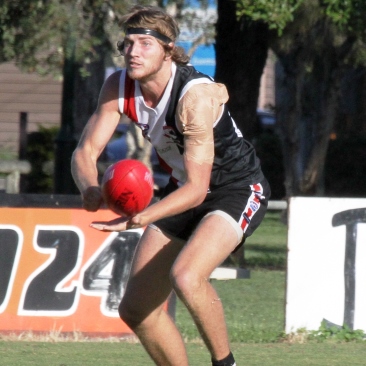 Before every game, Morningside’s Alastair Nash stands in the dressing rooms and acts as commentator of a match against himself.

It’s the way the 24 year-old gets himself ready, and a reflection of his attitude to life and football, an attitude that has made him a vital Panthers personality.

Panthers coach, David Lake has known Nash for most of his 24 years and said he had an incredibly ability to cut through the football’s intensity.

“He’s the one people can laugh at and he can take the seriousness out of the game,” he said.

His sense of humour comes through in conversation with Nash, from talking of his switch from meat pies to brown rice and tuna to his footballing commonality with father, Geoff.

“Dad played under John Blair and when I started, I did too,” he said.

“I guess that tells you how old he is.”

There is one thing that Nash is serious about – his passion for Morningside, and his excitement about joining the list of players in the club’s 100-gamers list, marking the ton against Mt Gravatt on Saturday.

“When I was a 16 year-old coming in and seeing the names on the locker room, as soon as I saw that I knew I wanted to be there,” he said.

“I feel like I’ve been here forever. It’s my home away from home.”

Nash’s loyalty has seen him remain at the club for his entire football career and Lake said it was testament to his strong character.

“Sometimes you run into a coach and a game plan that doesn’t suit you and to his credit, he stuck it out and here we are,” he said.

“He’s played every week and is a vital cog in the side.”

Nash started out with some of the club’s greats, as a teenager playing in the 2009 and 2010 premierships, with players like David Lillico and Nick Clarke.

Now, he is one of the leaders, captaining the club’s reserves to a premiership in 2013, with a number of those players now back in the senior side.

It was his stint in the reserves last year that reignited his passion for the game and drove him through the pre-season, amongst so much club change.

“There was a point last year where I wasn’t really enjoying it,” he said.

“I dropped back to the reserves and it all just clicked and my love came back.

With his 100th game on the horizon, Nash said he was determined to repay the debt he owes to the club that showed him faith when he was still wet behind the ears.

“It was a massive driving factor to prove myself again and show the people that showed me faith when I was younger.”

Nash has relished his mentoring role, with a number of 2013 reserves players getting their spot alongside him in the seniors this season.

“I really started to enjoy giving back to the players last year,” he said.

“It’s great to see them earn it and to see they’re getting a go.”

Lake said Nash’s significance to the side would only grow in future years, and in a game against their bitter rivals, the Panthers will find something extra.

“With blokes like Shelton and Tomlinson at the end of their career, Nash becomes incredibly important.”

“He’s extremely popular and particularly in that group around him of about 10 or a dozen blokes.

“They’ll find that little bit for him, they’re that kind of club.”