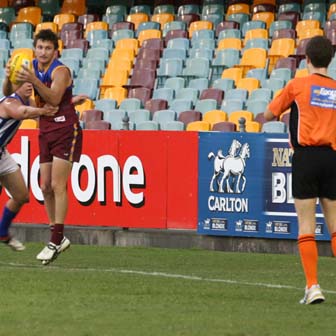 More consistency with free-kicks and greater communication were two of the key areas of umpire improvement pinpointed by players from across AFLQ senior competitions in a bold survey conducted by the umpiring team in preparation for the coming season.

However, there was also a large degree of satisfaction with how the umpires went about their jobs in other areas.

Undertaken to assist in the development of umpire coaching and learning strategies for the coming year, the survey asked players to rank the importance of six umpire attributes and then asked them to rate the umpire’s performance of each.

Non Bias and Fair, Consistent Application of Free Kicks, and Effective Communicator with Players were the top three attributes rated by players.

According to State Umpiring Manager Greg Howell, the performance results indicated that AFLQ’s umpires were competent in most areas of performance.

“But it did  reveal an opportunity for improvement in consistently applying free kicks and some aspects of player umpire communication in the match environment,” Howell said.

He added there would be further investigation into these areas to clarify the underlying issues and a number of education and training programs for umpires and the football community would be recommended.

Howell and the AFLQ Umpiring Department wanted to make the results of the survey public out of respect for the players who took the time to participate.

With the move to an even more elite NEAFL competition for the State’s top clubs in 2011, the umpires are following suit.

The online survey of players on umpire performance was all part of taking umpiring to an even higher level, keeping pace with the improvements in playing standards.

There were 175 responses to the survey which was distributed via an e-newsletter to 2200 players who participated in community football in 2010.

The Non Bias and Fair attribute was by far the No1 important attribute that players sought in umpires.  It is the belief of the AFLQ umpiring staff that the umpires appointed to matches understand their role as umpires and perform it as required.  There are also administrative systems in place to ensure umpires have no bias such as code of conducts and declaration of club affiliations.

The survey did not ask players to evaluate whether umpires displayed non bias and fairness. This will be addressed in further surveys.

Important free kicks rated by players indicated that holding the ball (Prior Opportunity) was the most important free kick (39.4%) for AFLQ to get right.  This was followed by High tackles and after disposals (late hit) (both on 20.6%).

High tackles and after disposal are in most cases matter of fact free kicks where the interpretation is straight forward.  That is “the tackle is either high or not”.

“AFLQ umpires are well trained in this area but the survey results suggest that the Umpires revisit these free kicks and review the match day strategies related to these,” Howell said.

Players agreed with the statements on umpire performance in actively setting the mark and line of kick, addressing volatile situations in confident, courteous and effective manner, using 50 m penalties to control player behaviour and the use of red and yellow cards.  These behaviours are regularly covered in coaching sessions and reinforced a number of times through the year.

Players were also asked to rate the performance of umpires in positioning, dress standards, understanding their role as umpires and fitness levels.  All responses were Most Times and Always.