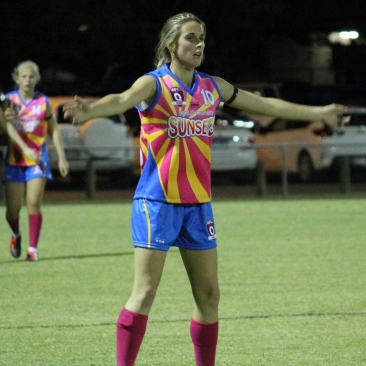 The first day of the 2013 Youth Girls State Championships wrapped up tonight, with some cracking games.

The first day of the 2013 Youth Girls State Championships wrapped up tonight, with some cracking games.

After an afternoon involving some athletic testing and an opening ceremony to welcome the competitors, the girls were chomping at the bit to get stuck into matches.

The experience of the Flames really showed, with a classy performance across the ground.

Co-captain, Maddie Protheroe, led from the front with two early goals, while Tayla Harris showed off her superb foot skills, with a major from 50.

In the other twilight game, it was the Gold Coast Sunsets who took home the bragging rights, 7.7 (49) 1.3 (9) over the North Queensland Lions.

The Lions fought hard and applied plenty of defensive pressure,. But they couldn’t punish the Sunsets the other way.

Sunsets captain, Zoe Lattanzi was superb, showed a couple of opponents a clean set of heels, setting the tone for her team.

Wendy Bristow kicked two for the Gold Coast and was one of the standouts of the match.

For the Lions, Miriam Agita was the sole goal scorer, while Elisha King stood out from the pack.

Aggie Harry was strong for the North Queensland side, while 2013 Queensland rep, Luana Healey, had a good game to start the carnival.

The standout match of the round came from the Sunshine Coast and the WCCCA Central Sub-regional trust Crusaders.

The Crusaders were ruthless in their tackling, and much of the first quarter was played between the arcs.

It wasn’t until the second half that the Storm broke away, running out the game with seven goals to one.

Benita Mai nabbed the Kurukums’ historic first goal, giving her side some reward for their tireless efforts around the ground.

The results of tonight’s matches determined the schedule of Day 2, with games starting at 12:30pm.

Tomorrow’s schedule is as follows: