U16 champs more than footy to QLD Diversity 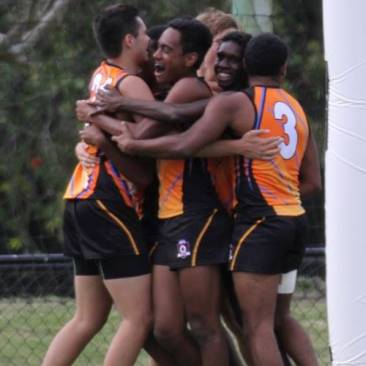 The Queensland Diversity team has impressed in its first U16 State Championships, but there’s far more to the side than their win-loss record.

Bringing together players from Indigenous and multicultural backgrounds, the inaugural Diversity team faces a unique challenge, but have handled it with aplomb, after a short preparation.

Diversity coach, Anthony Corrie, said the key was making their varied backgrounds a unifying element for the team.

“For us, the message is to get around and make sure we’re getting around and sharing where we’re from.”

“That’s what we (the diversity team) are here for and that’s the really good thing about it.”

While on-field success is a pleasing bonus for the side, Corrie said his focus was on making the program fun.

Brought together only a day before the championships kicked off, Corrie said he was amazed by the team’s quick progression.

“We have guys who play every week and are part of the Academy program and then we’ve got guys who are just thrown in from the World Cup team,” he said.

“There are sides in the competition who are all in the Academies, where a side like us is kind of thrown together the day before.

“What I tell them to do, they do. They’re a good bunch of kids.”

Corrie, who has previously coached the state’s Kickstart team, jumped at the opportunity to be involved and is relishing the experience.

“I’m here for managing and mentoring,” he said.

“I throw a lot of the responsibility back on the playing group and I just manage.”

Football is an invaluable part of the players’ lives, many of whom are part of the AFL’s Cape York House program, Corrie said.

“If some of these guys didn’t have footy, they could be incarcerated like so many of the country’s Indigenous population is.”

“It pulls people together.”