Tayla Harris nearly broke the Internet on Sunday night during the State Representative Carnival. The photo of her in full flight notched up the retweet ton on Twitter within hours. For the record, it wasn’t just the photo that was on fire on Sunday, with Harris finishing with eight majors. 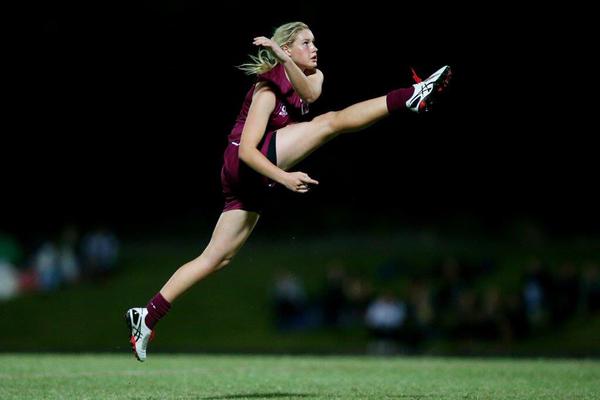 Spackman stands up on the big stage

I’d love to know Adam Spackman’s time over 10 meters. He has been influential for Morningside in 2015, and proved he can do it on the big stage on the weekend when Queensland took on Vic Metro. His first two steps are explosive; he breaks lines, and opens the game with quality ball use. He’s a star.

King of the North

I’ve heard a lot about the Cairns Saints big forward, and my first look at him on field on Sunday certainly disappoint. When North Queensland looked down and out for the count half way through the second quarter, he found a way. He didn’t look like dropping a mark all day; it was like he had super glue on each mitt. Four last quarter goals, to take his tally to seven for the afternoon, ensured the Northerners two wins from two starts, and he deservingly walked away the BOG medal around his neck.

The Queensland women’s team had a staggering 37 scoring shots in their big win over Tasmania Sunday night. They were swift with their ball movement, they ran for each other, and they hit targets all day. It was an outstanding display of football.

Coming off the back off a week off, with everyone nice and fresh, Surfers Paradise will have 60 players to pick from this week to fill their seniors and reserves. That means a staggering 16 players could miss out on selection this week. No wonder both sides are in the five.