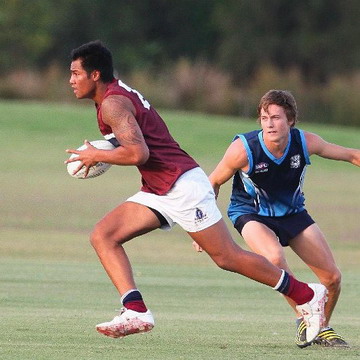 TSS down reigning premiers Marymount in a rematch of 2010 thriller.

The Southport School (TSS) has taken out the 2011 Clark Keating Cup against reigning premiers Marymount at All Saints Anglican College last week.

Marymount went into the match looking to take the trophy home for an incredible sixth consecutive year, a tough task against the in-form TSS side.

The victory is a testament to the commitment and enthusiasm of the TSS students, with only three boys having played AFL prior to this year’s competition.

In the end inexperience proved no barrier for the plucky and talented group who sailed through the competition not only undefeated, but with an average winning margin of more than 50 points.

A standout performance by TSS’s Ulupana Seteni earned him best on ground honours and four of the boys involved have also trialled for the Athlete Rookie Search Program.

The TSS war cry was sung with gusto at match’s end, with victory celebrations culminating in the presentation of the winner’s trophy to TSS Headmaster Greg Wain at a school assembly this week.

The Clark Keating Cup was named in honour of Lions Ruckman Clark Keating, who fittingly, is a former student of TSS.