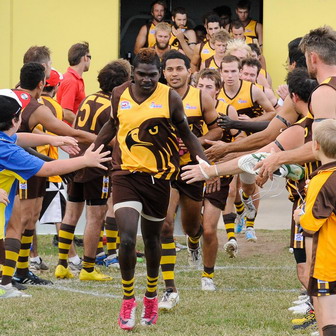 University Hawks AFC celebrated Indigenous round this weekend with a special honour for two of their players.

The Townsville University Hawks found a unique way to mark AFL Indigenous round during their club matches on the weekend, choosing two indigenous players as team captains.

Davidson Maxwell was given the honour of captaining the reserves side with Anthony Pascoe given the job of leading the seniors.

President of the University Hawks Shane Jurgens said the club wanted to celebrate the land, country and culture theme of Indigenous round in a meaningful way.

“We as a club wanted to stand together to acknowledge the amazing indigenous talent we currently have playing at our club and in our amazing game,” Jurgens said.

“All the boys were absolutely stoked to take the reins and were very excited to captain for the club.”

Four of the University Hawks hail from north-east Arnhem Land from Maningrida, about 5 hours drive from Darwin.

The boys played for the school’s junior teams and under 18 colts before moving in senior football with the Hawks this year.

The Indigenous round strategy paid off for the Hawks with the reserves winning by 5 goals and the seniors claiming a narrow 2-point victory.

“The boys put on a show and kept everyone entertained all day,” Jurgens said.