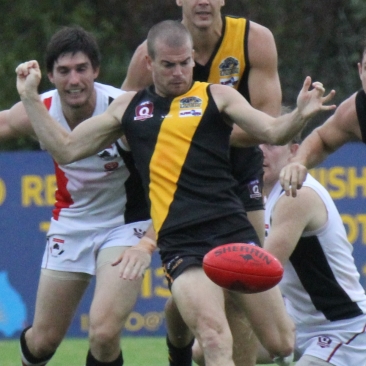 Labrador captain, Ryan Davey, will make a much-anticipated return to the Tigers team as they face an elimination final against Mt Gravatt on Sunday.

Davey was widely expected to miss the remainder of the QAFL season after breaking his foot against Mt Gravatt, but the 28 year-old’s recovery has been quicker than expected.

The Tigers midfielder was champing at the bit to get back in the side and was in contention for last weekend’s match against Palm Beach, but coach, Steve Daniel, said they opted for a cautious approach, armed with the double chance.

“If we hadn’t got the double chance and we’d gone out first week, he wouldn’t have played for the rest of the year,” Daniel said.

“Because we had that double chance, we wanted to hold off and do everything right.”

“He’ll be ready to go this weekend.”

Daniel said if Davey had his way he could have played the final regular round fixture a fortnight ago.

“Ryan’s the kind of player you have to hold back,” he said.

“He wanted to get back two weeks ago and he was contemplating it in the wet conditions.”

Davey has been training at the Gold Coast SUNS the past three weeks, utilising their hyperbaric chamber, an option that helped him reduce his recovery time by just enough.

Despite only playing 11 games this season, of a possible 19, Davey is the Tigers’ most important player and one of the standouts of the QAFL competition, and Daniel said his return would be invaluable for the side.

“It’s massive to have Ryan back, he’s our leader, our captain,” he said.

Davey is one of three inclusions for the Tigers for their elimination final against Mt Gravatt on Sunday, with key defender Tom Daniel and Kieran Daley returning to the senior team.