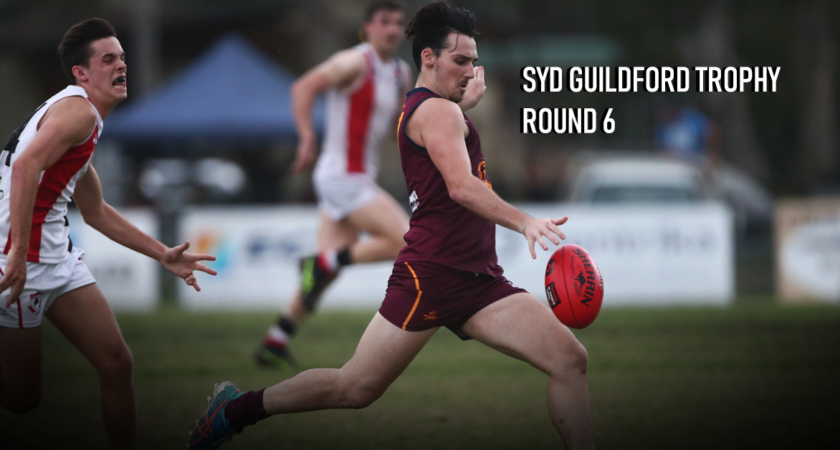 Thynne’s maximum votes caps off an incredible fortnight for the dual premiership Lion, who has racked up 19 out of 20 votes in the Syd Guildford Trophy whilst being the team’s stand-in captain.

This two-way midfielder isn’t shy with succeeding in the Syd Guilford Trophy, being a hotly voted player in last year’s season leading to him being awarded the Best and Fairest title.

Heading into this season the PBC are looking for their first hat-trick of premierships and seem to be on track with stand-out performances from teammates Angus Munro (eight) and Jason Burge (five).

A host of Tigers dominated the voting in Labrador’s thumping of Mt Gravatt with Emmanuel Baru (ten) also earning the maximum ten votes.

Broadbeach succumbed to Surfers Paradise in the Demons’ 17-point victory but votes in the Gold Coast derby were evenly split.

Surfers midfield Jack Yelland continued the Round 5 trend, as he received ten votes for his outstanding performance that also included one goal.

Broadbeach didn’t go down without a fight as the quality of football produced by their side meant two players made the tally this week with Jackson Fisher (eight) and Ryan Dienjes (2) also earning votes.

Western Magpies player Gareth Crawford became the fourth player to earn the maximum after guiding the Magpies to a landmark win over Sandgate.

Crawford’s efforts were followed by a bevy of Magpies and Hawks as nine players featured in the voting including Jack Goodall (four) and Daniel Edwards (four).

Not Now, Not Ever - AFL Queensland says no to domestic and family violence
Round 4 Bond University QAFLW Review