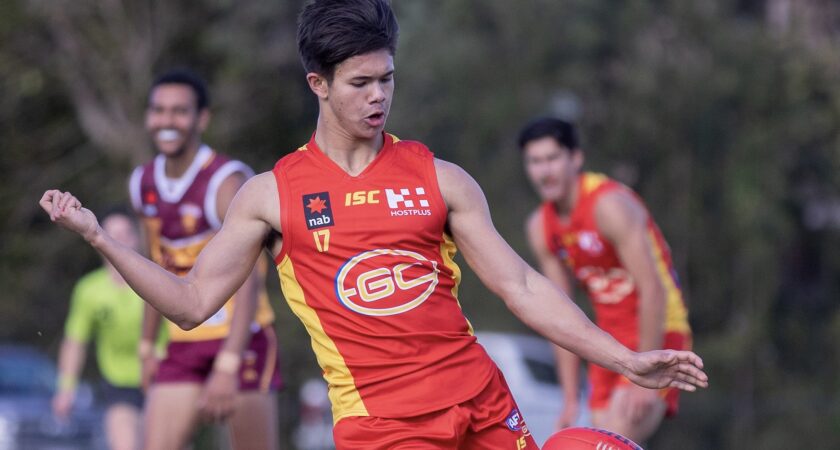 Queensland’s Austin Harris, Will Bella and Bodhi Uwland, who all hail from different parts of the state, have been invited to the 2021 NAB AFL Draft Combines to be held across multiple locations across Australia in the coming months.

Bella, who comes from Mackay’s Bakers Creek, Cairns Saints product Harris and Burleigh’s Uwland are three of 90 players who’ve received the call up.  All are currently part of the Gold Coast SUNS Academy.

While the current situation relating to the COVID-19 pandemic sees variations in restrictions across the country, the annual NAB AFL Draft Combines will be state-based combines in 2021.

A total of 120 players will participate in the 2021 NAB AFL Draft Combines, with the remaining 30 players invited by the end of September.

The state based NAB AFL Draft Combines are below.

In addition, the 2021 NAB AFL Draft Combine is scheduled for Wednesday September 29 and Thursday September 30 at Marvel Stadium in Melbourne for the top 60 players as identified by AFL Club recruiting staff. These players will be selected out of the 120 players and participate in medical screening and interviews with AFL Clubs.

All states and territories will be represented at the 2021 NAB AFL Draft Combines with a spread of talent across Australia including Queensland, NSW/ACT, Northern Territory and Tasmania.

AFL Clubs are asked to each select a list of their preferred players to attend the 2021 NAB AFL Draft Combine, with all invitees all receiving nominations from several AFL clubs.

AFL Talent Ambassador Kevin Sheehan said the National Draft Combine is an opportunity for players to showcase their physical ability before the 2021 NAB AFL Draft at the end of November.

“Although there have been various interruptions to State Leagues and Talent programs again this year, the AFL Clubs have seen enough potential to issue this initial list of 90 invitations to players from all regions of Australia,” Sheehan said.

“They are regarded as having the necessary potential to be contenders for the 2021 NAB AFL Draft to be held in late November. As the season concludes, a minimum of 30 additional players will be added for Combine testing as AFL Clubs consolidate their views on players of interest.”

“The 2021 version of the NAB AFL Draft Combine will look a little different, but we held similar events in 2020 with great success and it will provide all AFL Clubs a chance to assess players on their physical capabilities.”

“We are certainly very excited with the level of talent of this group of future stars for the AFL,” Sheehan said.

Vic Metro has the largest list of invitees with 22 players selected to take part in the respective NAB Draft Combines, followed by Vic Country with 19 players, Western Australia and South Australia both with 18 players invited.

All data will be available to AFL Clubs at the conclusion of each state-based NAB Draft Combine.

The AFL is continuing to work towards a Return to Train and Return to Play model for Vic Country, Vic Metro State and the Allies Squads, which if it were safe to proceed, would ensure talent are provided with an opportunity to showcase their skills and assist them in reaching the elite level. All squads will not commence training or play matches until it is safe to do so.

Due to the evolving COVID-19 situation across the country, the AFL will continue to work with all State and Territory Governments to best manage the relevant border restrictions ensuring the health and safety of the community remains paramount for the 2021 NAB AFL U19 Championships.

The intention is to host all players, coaches and officials in Melbourne at the end of September.

The NAB Draft Combine is part of the NAB AFL Rising Stars Program, which supports grassroots players and football communities and helps young Australians fulfil their dream of playing in the AFL.