THORNE BACK WITH THUNDER 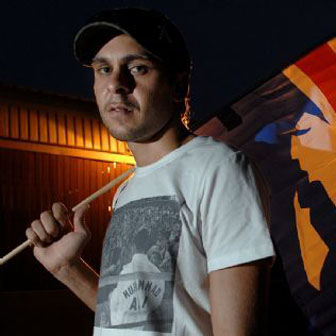 Former Western Bulldog Shane Thorne has returned home to Territory Thunder in the latest coup of big name signings for the NEAFL club, reports Jess Webster of the NT News.

Thorne, 24 (pictured courtesy NT News), made his NTFL comeback in late January for Wanderers in Division 1 after a knee reconstruction cut short his tenure in the AFL.

Thunder coach Murray Davis says the running utility is eager to jump in the black, white and ochre colours again after some time away from the game.

“He was probably just a bit frustrated given the sense that he didn’t get a chance to really showcase his talent down south,” Davis told Webster. “He wasn’t disillusioned with footy, but needed some time to see where he was at and what he wanted to do.

“He has been assessed by our medical staff (on his knee) and they are confident he will make a full recovery, with the right amount of work, to get back to where we know that he can perform.”

Thorne was one of the sensations in the Thunder’s debut season in 2009, attracting the attention of a number of AFL clubs.

Mosquito recently took out the Warriors best-and-fairest award in his first year at the club after being recruited from Warmun – a small indigenous community 150km southwest of Kununurra.

His uncle, Purdie, was awarded Tahs best first year player while Argus – the younger brother of Thunder player Matthew – boasts elite running skills and is the third player from ex-QAFL club Zillmere to follow their former coach to the Top End.

“He (Farrer) is a bit of a leaper and that’s probably the role Zephi (Skinner) did, across half forward and in the ruck,” Davis said.

“Will has done a really good job for Districts. He has improved a lot I think from when he first started playing with them.”

Experienced defender Cameron Roberts has also resigned with the club, joining Andrew McLeod and Jason Roe as the Territory’s potent defensive power entering its third season in the Queensland-based competition.

Thunder’s season kicks off against Morningside in the Foxtel Cup at the Gabba on March 26, followed by Round 1 of the NEAFL against Aspley at TIO Stadium on April 2