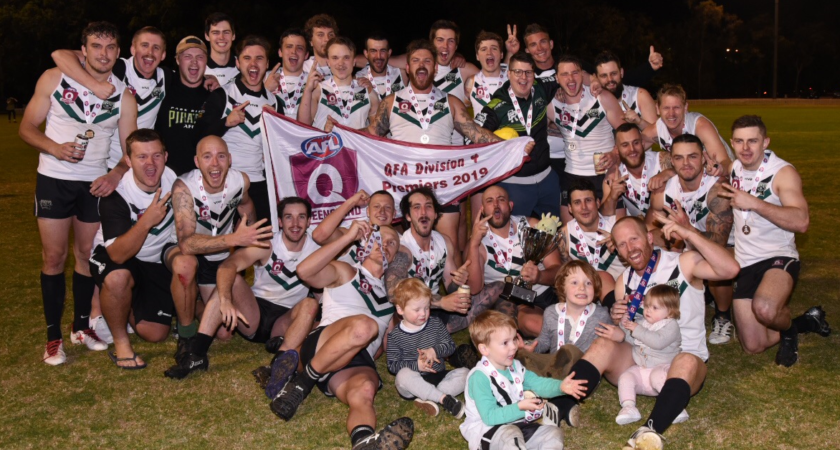 Park Ridge has climbed their way to the top of the QFA Division 4 in their inaugural season and held the Grand Final trophy high, defeating Maroochydore 32-points.

The Pirates were forced to wither the constant Roos pressure in the first half but managed to kick away after the main break to claim a historic 9.11.65 to 5.3.33. victory.

The win caps off another successful season for the Pirates who are no stranger to the big stage after prevailing in the QFA Division 2 Grand Final last year.

Although the scoreboard was humble as Park Ridge struggled to shake the inaccuracy bug in the first half missing dozens of opportunities to capitalise, keeping Maroochydore in the game.

Following the main break, Park Ridge looked by far the more settled side and threatened to run away with three early goals in the third term.

With the game teetering on a knife’s edge and well in the Pirates’ favour, Maroochydore steadied and reasserted themselves in the contest with much needed majors through Shaun Guthrie and Cameron Hackenberg.

While Park Ridge still held a handy lead, the Roos strong finish to the term ensured the game was still up for grabs heading into the final quarter.

The final term became an arm wrestle as both teams fought for the season title but a downfield free kick to Park Ridge sealed the game for the home team.

Former NEAFL midfielder Blake Passfield scored the first major of the clash and remained strong for the Pirates throughout the game.

Tom Overington played well in the midfield but had the ability to make an impact inside 50 for his side while Brandon Cherry booted two majors.

For the Roos half-forward Jarryd Eves made an impact booting a major in the second stanza, keeping his side in the game while forward Shaun Guthrie held his own.

Mitchell Bird also performed well for the Roos and Zac Epstein made an impact on the wing.