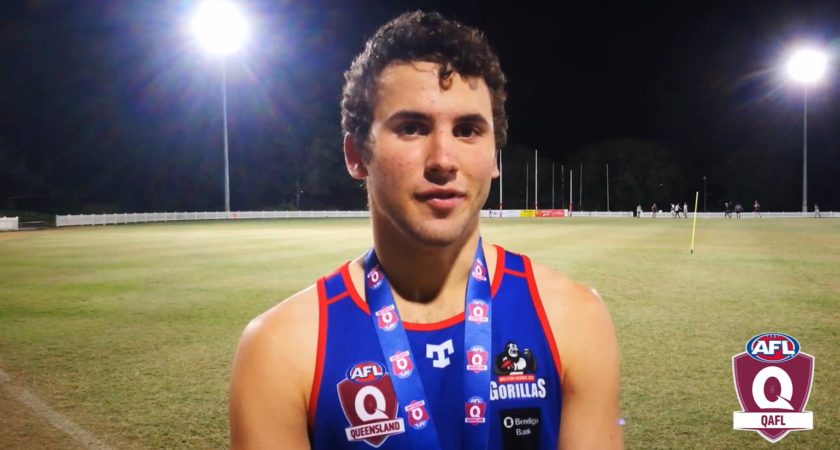 IF everybody at the Wilston Grange Gorillas had the same passion for success as young Nick Dickson, then the club will soon be revelling in some good times.

One of Brisbane’s oldest clubs, Wilston Grange have gone through some extremely tough times, way too many as far as Dickson is concerned, but he believes success could be just around the corner.

Dickson is the QAFL Round 10 Rising Star nominee and a worthier recipient you could never meet.

Dickson is a third generation Gorilla, following his grandfather Peter and father Dale to wear the red, white and blue of the Grange.

“I’ve played at the Grange since I was about five, it’s the only club I’ve ever played for,” Dickson said.
“Things have definitely been tough at times, but in time surely things will get better.

“They’ve got a good program at the moment and if they keep building and building, in a couple of years the good times will come.”

Dickson’s confidence is built on a good crop of young players, himself included, coming through the ranks.

For example, the Gorillas colts currently top the ladder in their division. “That’s a great sign for the future,” he said.

Last year Dickson was named QAFL Colts best and fairest playing basically as a midfielder.
He made his seniors debut in the second round against Mt Gravatt and played his fifth game in first grade against Labrador last weekend.

The occasion marked his 19th birthday but there was no victory to celebrate the milestone – and as yet he has not played in a winning Grange seniors side.

“I’ve been in the learning process a lot, which is great,” he said.

“I’d rather win than lose, obviously, but I’m enjoying myself.

“I believe we’re not too far away from a win. We started really well last weekend but we dropped off in the third quarter.”

Used by the Gorillas in the midfield but mostly as a pressure small forward, Dickson says he has to focus on what he is doing and work on improving things.

Studying to be an electrician at TAFE, Dickson also concedes he has to build up because he is a lean 180cm tall and weighs 75kg.

It was in 1989 that Wilston Grange merged with fellow northern suburbs club Kedron to become Kedron-Grange.

This marriage lasted only until the end of 1996 and the entity disappeared.

However, Wilston Grange fought back and revived in the QAFL’s lower divisions before its resurrection in the main state league.

So how do clubs like the Grange survive after so many disappointments?

“Everyone puts in for the hard yards to help out.

“Success will come one day, and hopefully soon. I certainly would love to be a part of any success the club may have.”

In the meantime, all Dickson wants is a victory for the Gorillas – and to be showered with sports drink for the first time in his seniors career.