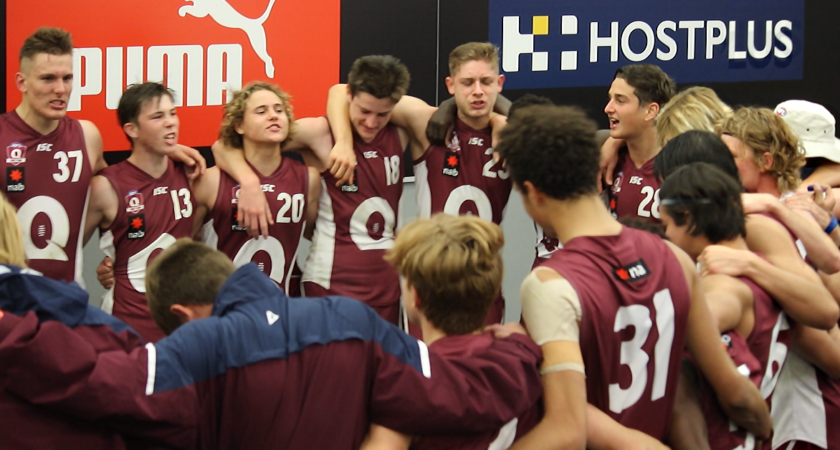 A dominant second term has guided Queensland to their first win of the NAB AFL Under 16 National Championships at Metricon Stadium on Tuesday night.

The Queensland side booted four goals to one in a dominant second term that ultimately proved the difference between the two sides in the 9.3 (57) to 4. 13 (37) affair.

The two sides were evenly matched through the game’s opening minutes before Queensland settled late in the term to boot two goals and hold a lead at the first change.

With a plethora of tall options inside 50 at their disposal, the home side’s kick-long approach worked wonders and gave the likes of Will Bella and Noah McFadyen an opportunity to get in the game.

McFadyen booted two early goals to increase the lead to 13-points before majors to Lachie Harrop and Bella extended it beyond three goals at the main break.

Queensland’s pressure, led by Daniel Lanthois (11 tackles) and Bodhi Uwland (four), who produced perhaps the highlight of the game with a bond-crunching mid-air tackle in the centre square, set the tone for the win and often meant Tasmania kicked under pressure.

With a firm lead now established, Queensland and Tasmania traded goals in the second half before a free kick allowed Will Bella to boot his third of the game and all but ice the contest in the fourth term.

Austin Harris (19 disposals), Lanthois and Ethan Kerr (both 18) both found plenty of the ball while Ryan Sergi provided plenty of run and carry out of the back half with eight rebound 50s.

Queensland coach Leigh Harding was pleased with his team’s performance and said the win would be one worth enjoying.

“It was good work for our effort. All of the boys have to travel to trainings from the Gold Coast, the Sunshine Coast to come to Brisbane as a group – it’s definitely a reward for effort,” Harding told aflq.com.au.

“They definitely deserve that win tonight.”

“I think when the ball spilt free a little be we were onto it a little bit faster and then we were a bit cleaner.”

Queensland will face Northern Territory at Voxson Oval this Saturday at 12:15pm.