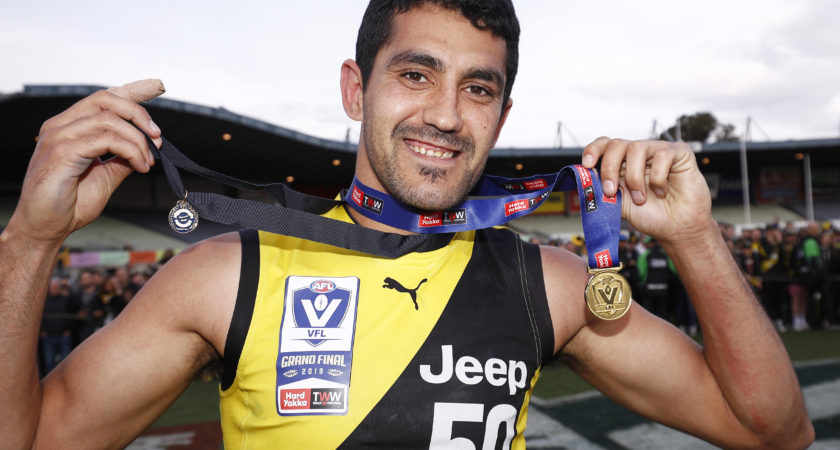 It’s grand final time. Everything is magnified many times over, and invariably there are big stories good and bad. Yesterday’s selection for Saturday’s premiership decider between Richmond and the GWS Giants was exactly that.

It was agony in the GWS camp and ecstasy in the Richmond camp.

Queenslander Lachie Keeffe, outstanding in the preliminary final win last week, was dropped from the Giants side after captain Phil Davis was declared fit.

Keeffe was described by award-winning analyst and AFL Hall of Famer Terry  Wallace as “desperately unlucky” after Keeffe and Ian Hill made way for the return of Lachie Whitfield from appendix surgery and Toby Greene from suspension.

Wallace said Keeffe was ‘easily’ GWS’ second-best match-up option for Richmond star Tom Lynch, and was surprised he was not preferred to Adam Tomlinson, who had been omitted earlier in the finals.

Keeffe will be on standby in case Davis, who last week carried calf, finger and shoulder problems and has not trained publicly all week, is a late omission.

But history is against a late change. The last time there was change to a selected grand final side was in 2010, when Collingwood’s Simon Prestigiacomo ruled himself unfit to play.

So 29-year-old Keeffe will watch with a heavy heart as the Giants, in just their eighth year in the AFL competition, look to pull off a big upset to claim their first flag.

The ecstasy at Punt Road was even more stunning when the Tigers chose 27-year-old Marlion Pickett, who spent two and a half years as a teenager, to make his debut.

Pickett will be the first player in 62 years and just the sixth player in AFL history to debut in a grand final.

The last player to debut in a grand final was Collingwood’s Keith Batchelor in 1952.

Originally from suburban Murrumbeena, Batchelor had walked into Collingwood in 1949 but when he was unable to get a game he asked for and was granted a clearance to Carlton in 1951.

Only after he again failed to break into the top side did he decide to return to Collingwood in 1952.

Originally a forward, he found himself playing in defence in the Reserves late in the season due to a wave of injuries, and out of the blue at 21 he was picked at fullback for the grand final against Geelong.

It wasn’t a great day for him – he played on George Goninon who kicked five goals in Geelong’s 46-point win.

Batchelor fared far better 12 months later when he played at full forward in the 1953 grand final and kicked four goals in a 12-point Collingwood win over Geelong.

It wasn’t until 27 May that Pickett was picked up by Richmond via the AFL Mid-Season Rookie Draft.

It was a massive punt after Pickett had been overlooked by every AF< club in the 2018 National Draft. He had played only two games in the WA competition due to a finger injury when drafted and even then was going to be another two months before he would play.

There was never any doubting the talent of the 184cm 84kg utility player, and last year the Gold Coast Suns even flew him from Perth for a ‘meet and greet’ with the club.

But in the National Draft every club passed on him. They were put off by the troubled youth of the father of four.

Richmond gave Pickett a belated chance in the AFL in May after a similar gamble on fellow West Australian Sydney Stack proved a big success.

Stack, also overlooked in he National Draft, was signed as a supplementary selection in February and despite a late season injury which cost him his place in the senior side he finished third in voting for the NAB AFL Rising Star.

Amazingly, it wasn’t until early August that he made his debut for the club in the VFL but the week following he was named as an emergency for the AFL side.

He was in the 26-man senior squad for each of the Tigers’ AFL finals, and before the qualifying final against Brisbane at the Gabba coach Damien Hardwick was effusive in his praise.

“Marlion’s one of those guys you love the look of. After another pre-season, he’s going to be an incredible player for us. He certainly has a lot of upside,” Hardwick said at the time.

In only his sixth VFL game last Saturday Pickett was judged best afield in the Tigers’ VFL grand final win under AFL assistant-coach of the year and former Brisbane premiership ace Craig McRae.

Then, after Jack Graham was ruled out with a shoulder problem, Pickett was preferred to Jack Ross and Kamdyn McIntosh, who had been held out of the VFL grand final as cover against injury

Pickett has played just once at the MCG – in the VFL – but will run out in front of 100,000 people at headquarters on Saturday.

He will debut wearing jumper #50 in the grand final, joining GWS Queenslander Sam Reid, who also wear #50, in a slice of history.

They will be the second and third players in AFL history to wear #50 in a grand final, following West Coast’s 1994 premiership player Ryan Turnbull.

Only four players have worn a number higher than #50 in a grand final.

The other four players to debut in a grand final were:-

Bill James – Perhaps the best story of all, he was 20 when he played his one and only AFL game for Richmond in the 17-point 1920 grand final win over Collingwood.

George Rawle – Was nearly 34 when he debuted for Essendon in the 1923 grand final win over Fitzroy. He played 19 games in 1923-25, including a three-match round-robin semi-final series in 1924 which saw the Bombers declared premiers.