The NEAFL club punching above its weight 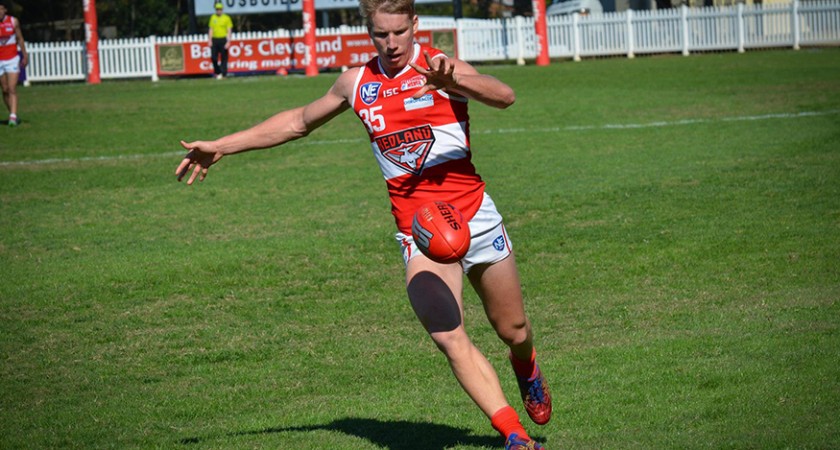 IF YOU took a guess at which club produced the most mature-age draftees from last month’s national and rookie drafts, where would you start?

Somewhere in the VFL? Wrong. The WAFL? The SANFL? Wrong and wrong.

How about Redland Football Club, situated 40km east of Brisbane and playing in the ever-improving NEAFL? Correct.

Three mature-age rookies along with two national draftees – Ben Keays (Brisbane Lions) and Wylie Buzza (Geelong) – made it five players all up headed to the AFL from the Bombers.

Remarkably, the trio were also the past three winners of the NEAFL Rising Star award.

It was just one storyline in an impressive few days for the NEAFL.

A total of 18 players who played in the competition during 2015 are now on AFL lists.

Sure, this includes a host of academy players from the Giants, Lions, Suns and Swans, but the result is quite incredible with the competition reducing from 14 teams to 11.

Those drafted were spread among 12 clubs and dotted in every state in the AFL.

While the academy systems have been rightly praised, Redland’s performance particularly should be applauded.

“We like to think we’ve got something to offer for players who are still aspiring to play AFL,” David told AFL.com.au.

“If you create the right environment, the players want to be there and they start enjoying their footy. That’s a simple philosophy, but that’s the way we like to go about it.

“We like to think we put parameters in place and set some guidelines, but at the end of the day, we want these boys to shine and let the shackles go and let them play to the best of their ability.”

Uebergang was previously a member of the Lions academy and has now turned himself into a rangy key-position prospect who can play both ends of the ground.

Hunter is a 200cm ruckman with good endurance, while Smith is a prolific midfielder.

“I think the recognition of the competition is getting better,” David said.

“I’d like to think those days are gone where players feel like they have to leave the state to progress.

“At our club we see our role as a bit of a conduit (to the AFL) and if we help these boys get to where they want to be, as much as it hurts us to lose five quality blokes, that’s terrific.

“Any player that has aspirations of playing AFL footy … it’s been proven if you work hard and you have the right work ethic and are prepared to commit, the opportunity will be there.”

Two outstanding local volunteers have been recognised and honored for their contributions to sport in our region across the Australia Day ceremonies, with... [more]