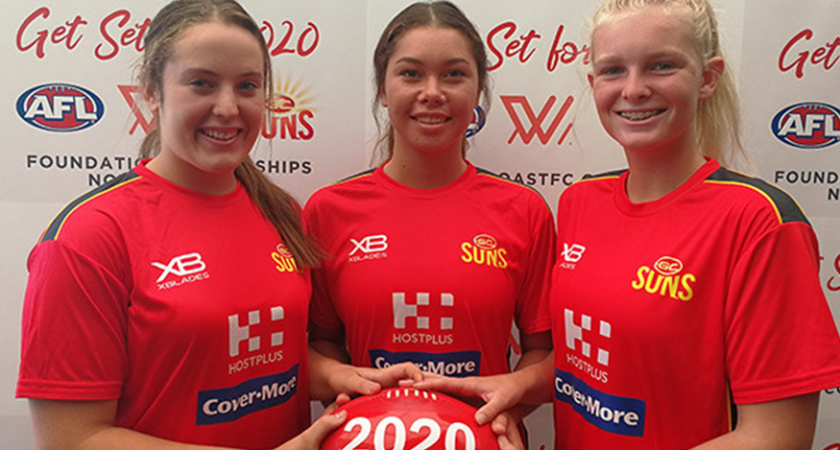 The Gold Coast SUNS path to joining the elite AFL women’s competition in 2020 has been revealed with the SUNS to field a team in a new winter series in 2018.

The SUNS will line up against teams from the GWS GIANTS and Brisbane Lions in the series which will result in matches being played over a 10 to 12 week program in 2018 and 2019.

SUNS Chief Executive, Mark Evans said the decision to structure the entry was based on ensuring the club had the most beneficial lead in to entering AFLW in the 2020 season.

“We are really excited that we will see the SUNS play in 2018. We believe female footballers on the Gold Coast, Northern Rivers and throughout North Queensland will aspire to represent their regions through this competition in what is a stepping stone to joining the elite competition in 2020,” Evans said.

“Having players from our Talent Academy zones and beyond aiming to play for their region during this competition will allow the SUNS to truly represent the Gold Coast, Northern Rivers and North Queensland with players set to come from a range of clubs and even potentially other sports who we identify through talent ID days to be held in in 2018.

“We want to thank the AFL and AFLQ for all the work and planning that has resulted in us being in the position today to confirm our path to 2020. AFLQ have really pioneered women’s football and their vision and commitment has been long lasting and because of that hard work over a number of years our elite teams are as well placed as anyone when it comes to identifying talented athletes.

“Importantly we will also work closely with all of the women’s teams and clubs in the QWAFL (Queensland Women’s Australian Football League) and QWFA (Queensland Women’s Football Association), along with North Queensland to identify the local talent, develop training programs and provide development opportunities for coaches and others.

“Today’s announcement means we will now have a complete pathway in our regions from Auskick to elite competition for male and female footballers,” Evans added.

Battye is the driving force behind the Coolangatta Bluebirds, who up until 2018 have been the only team representing the Gold Coast in the QWAFL.  She has worked tirelessly for the team since their establishment in 2014.

McLarty and Webber are familiar faces at GC SUNS HQ, where both women work in the AFL Queensland Gold Coast office. McLarty is the Gold Coast Regional Manager for AFL Queensland and has been working in the AFL industry for over 17 years.  She was the first full-time female development officer in Australia and has seen firsthand the growth of female football.

McLarty was also instrumental in the development of the bid to secure a license to enter the AFLW in 2020 including presenting the submission to the AFL selection committee alongside Sam Riley and former Gold Coast SUNS Talent Academy member and recently drafted Brisbane Lions AFLW player Kalinda Howarth.

While Webber, the Gold Coast Juniors league administrator for 20 years, has been incredibly supportive in introducing the youth girls into the local competition.  The Gold Coast Junior girls competition was established in 2011 with 3 Under 17 teams and now has over 24 teams with 265% growth in the past 12 months.

Further members will be revealed in the coming months.

To register for the Talent ID Days, click here.