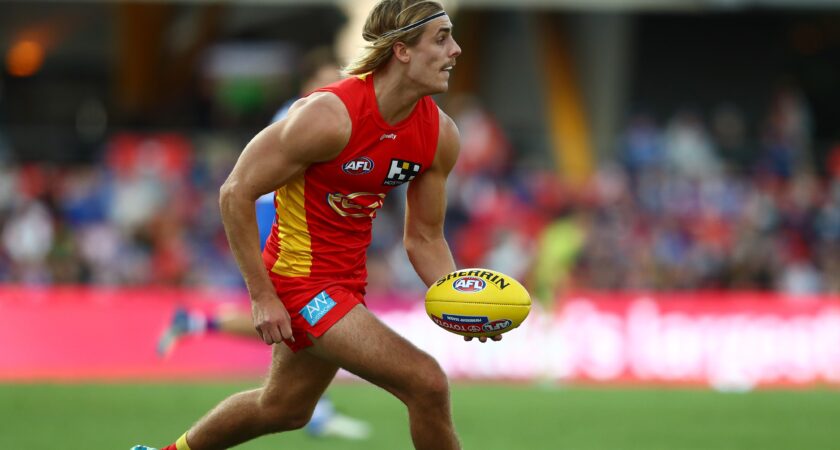 Gold Coast SUNS midfielder Jeremy Sharp has been awarded the Round 18 NAB AFL Rising Star nomination after a career-high 30 disposals in just his sixth AFL game against the Western Bulldogs on Saturday afternoon at Metricon Stadium.

To go with his 30 disposals, the 19-year-old took 10 marks, laid two tackles and had seven rebound-50s to be one of the SUNS best players in their 11-point loss.

Sharp made his AFL debut in Round 10, 2020 and played two games in his debut season before making his 2021 debut in Round 15 against North Melbourne. He’s played four games on the bounce averaging over 21 disposals, six marks and kicked his first goal against Richmond in Round 16.

The Gold Coast SUNS traded up the draft order to secure the Western Australian with selection 27 in the 2019 NAB AFL Draft from East Fremantle. Sharp represented Western Australia at the 2018 and 2019 NAB AFL Under-18 Championships and earnt All-Australian honours on both occasions after impressive representative carnivals. In his draft year he averaged over 15 disposals in the WAFL for East Fremantle in his six matches at senior level.

Sharp played his junior football with the Attadale Bombers in Perth.

A NAB AFL Rising Star nominee will be named following each round of football in the 2021 Toyota AFL Premiership season.

Following each round of the Home and Away season, a panel of judges select a NAB AFL Rising Star nominee. At the completion of the season, one of these nominees will be chosen as the 2021 NAB AFL Rising Star. The panel takes into account the performance in that round first before comparing the performances in previous rounds when deciding who is the best performed ‘eligible player’ for that week.

The 2021 NAB AFL Rising Star winner will be awarded the Ron Evans Medal, along with $20,000 from NAB and a dedicated private banker. NAB continues to support footballers by recognising the junior clubs that helped foster the early careers of the nominated players. Jeremy Sharp junior club, Attadale Bombers Football Club, will receive a NAB Club Recognition Award valued at $2500, comprising financial and practical resources, as a result of his Round 18 nomination. Since supporting the NAB AFL Rising Stars Program, NAB has donated over $900,000 worth of resources to junior football clubs through this initiative.

NAB has been supporting footy from grassroots to the elite level since 2002, providing boys and girls with a clear pathway from NAB AFL Auskick through the NAB AFL Rising Stars Program all the way to the big time.

A NAB AFL Rising Star nominee will be named following each round of football in the 2021 Toyota AFL Premiership season.