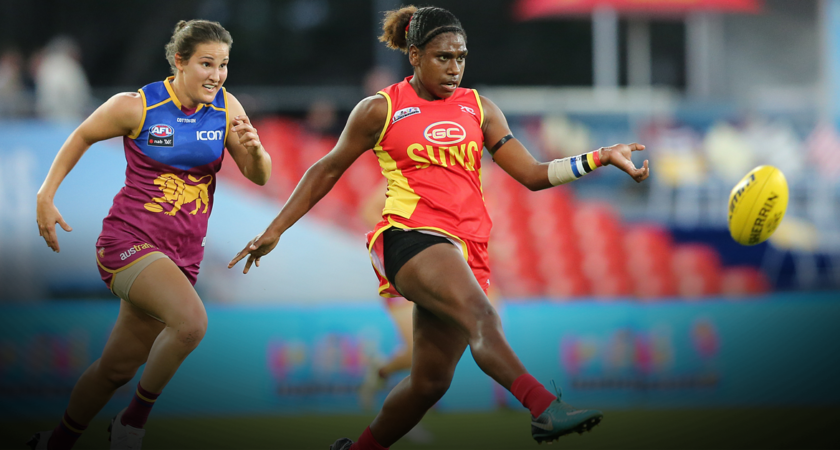 If it hadn’t already, the road toward the 2020 AFL Women’s season is well and truly underway.

And for both of Queensland’s AFLW teams, Saturday’s first QW Winter Series game was crucial for a number of reasons, namely to identify the players that will likely join either team’s lists ahead of next summer.

Over the coming months, both Gold Coast and Brisbane face the proposition of building their lists following various circumstances over the past few months.

After losing four players to AFLW clubs this time last season, the Lions again lost a sizeable chunk of their playing list with a further 11 players – including eight moving down the M1 to join the SUNS – departing ahead of the 2020 season.

The SUNS have already locked away a portion of their playing list including their latest signing – Coolangatta’s Maddy Roberts – but their list build is only just over halfway complete.

Gold Coast have locked away 16 list spots and 14 remain open for the taking.

Similarly, Brisbane have plenty of opportunities for the taking with Lions coach Craig Starcevich suggesting they will look to select five Under 18 Queensland representative players and five from the QAFLW following their QW Winter Series win.

Starcevich also said the Winter Series played a crucial role in assessing players vying for a spot but acknowledged players must perform at all levels of competition throughout the winter.

“For them it’s a body of work across the whole winter. That’s QAFLW level, that’s under 18 nationals and it’s games with us,” Starcevich said.

“It’s nice to see how they fit in off the field and on the field. If you think you have a good person who you think will fit the group, it’ll go a long way in going to secure them via the draft.”

Starcevich also highlights two current Lions, who joined the team in last November’s NAB AFLW Draft as examples of players who caught the eye of club officials during the Winter Series.

“Certainly, last year when we were looking at who we want to draft, (Nat) Grider and (Jesse) Wardlaw really put their hands up last year throughout the Winter Series so it was a very worthwhile exercise last year,” he said.

State team players from both sides will be able to feature in the next QW Winter Series but will miss the final game, to be played at the Gabba, which takes place just one day following the NAB Under 18 AFLW National Championships in July.

Gold Coast coach David Lake said the opportunities afforded to both Under 18 and QAFLW players throughout the Winter Series will benefit both the coaching staff and players as they audition for a list sport for the upcoming AFLW season.

“I still need to find 14 more players. The first 16 I have an expectation from but the other 14 I’ve got to find out what they bring and how they complement what I’ve got already,” Lake said.

“At the end of the day, the players give themselves the best opportunity to lock themselves in.

“In our next game in Mackay… we’ll prepare a little bit differently. It’ll be another experience for the girls and they’ll learn more about themselves as well.”

Game two of the QW Winter Series will take place next month on June 23 at Great Barrier Reef Arena in Mackay.