SUNS Academy put to the test 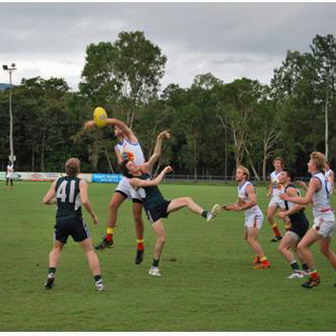 Potential Gold Coast SUNS Academy players took part in an invitational series against Geelong College in the lead up to the recent Richmond Vs Gold Coast SUNS game in Cairns.

The SUNS Academy squad was made up of players from North Queensland.  Many had never trained or played together before and the hit-out against Victorian players their own age proved a valuable learning experience.

The teams battled it out over three games with Victorian powerhouse Geelong College too strong for the SUNS hopefuls in all three encounters.

Game one was played at the Trinity Beach football club with Geelong winning 5.9.39 to the SUNS 3.6.24.

Slippery conditions on the day made it difficult for both teams with the quality of ball delivery to the SUNS forward line eventually costing them the game.

Overall, the SUNS coaching staff were happy with their teams contested possession and defensive pressure.

With a local schools competition starting the next day, the SUNS has to try and balance each players workload, making it difficult to have their best playing group together for long periods throughout the match.

The coaches praised the work of their three Rockhampton players who proved they were able to match the intensity required to compete physically.

Geelong College’s ability to rotate through their entire 32-man squad enabled them to add five goals to zero in the final quarter and inflate their winning margin.

The final game was played at Griffith Oval home to the Cairns Saints in overcast conditions.

Despite the score line, the SUNS coaching staff were very pleased with the work rate and effort from their players after a heavy week of football.

The three-match series was also used to expose a number of high school AFL players with little club football experience and SUNS rookie search players to a higher level of match play.

The Gold Coast SUNS Talent Academy is a multi-level program that provides young athletes with the opportunity to participate in a first class sport and education experience facilitated by AFL Queensland and the Gold Coast SUNS.

The Academy caters for aspiring players between 12 and 18 years in the Northern NSW and Gold Coast regions as well as in Far North Queensland (from Rockhampton to Cape York).