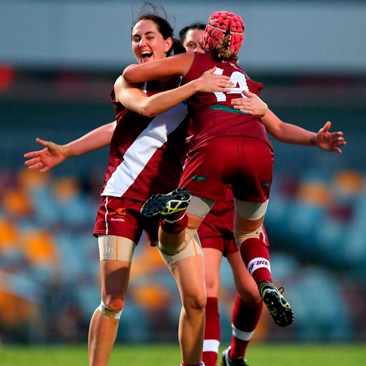 Highly decorated Queensland footballer, Sharni Webb has added coaching to her arsenal, taking her chance to pass her football knowledge on as a playing assistant coach for QWAFL side, the University of Queensland.

A dual state representative, Webb began playing AFL at the age of 15 in the Caloundra Women’s League after encouragement from her brothers.

Following the collapse of the league in Caloundra, Webb relocated to Brisbane where she enjoyed years of success with the Zillmere Eagles.

Now a qualified PE teacher, Webb is drawing on her on and off-field skills to assist Michael Swann coach the Red Lionesses squad.

“I was training with the UQ girls towards the end of 2013 and after I joined at the start of this season, Michael didn’t wait long to ask if I wanted to get involved in a coaching aspect,” Webb said.

“Having that teaching experience from university put me in a better position to teach the girls about the game, which was great, but I still think I’m a better player than coach.”

While still only new to the coaching world, Webb emphasised the importance for women to enter those ranks, assisting inexperienced girls and provide a point of difference in a male-dominated arena.

“I wasn’t really sure how to exactly coach at first, but I saw it as an opportunity to pass on some knowledge from my past experiences as a player to the girls.” Webb said.

“Not many girls get into coaching, even in female based teams, so I think the girls really liked having that female perspective in a coaching position because it was someone they could identify with and relate to.”

The young Queenslander said she was inspired to pursue coaching after a visit from South Fremantle assistant coach, Michelle Cowan.

“Michelle came and spoke to us about her journey in football and that when she started coaching people told her that she would never live to see a female coach at a high level,” Webb said.

“That really fired her up to prove them wrong and now women like herself and (Port Melbourne assistant) Peta Searle are involved in some pretty important positions.

“Michelle really inspired me to take coaching seriously and give back to some of the girls to encourage them with their own football path.”

Webb’s playing aspirations certainly haven’t dimmed despite her added responsibilities, with the 22 year-old nominating for the 2014 Women’s Draft, in the hope of being selected for the second Women’s Exhibition Match in June.

Webb will continue as playing-assistant coach at the University of Queensland in the QWAFL for the remainder of 2014.