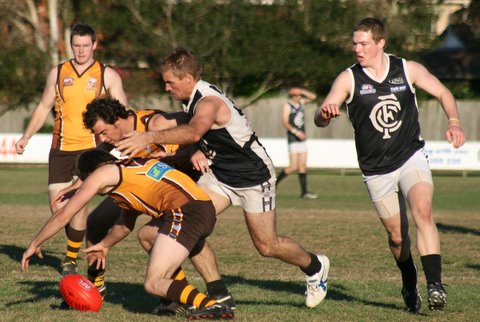 The Aspley Hornets will take on finals bound Coorparoo on Saturday to kick of the last round of regular season football for 2011. Aspley lost a nailbiter with the last kick of the game in round 17 and will desperately want to make amends. Inaccurate kicking again proved to be costly as the Hornets finished with more scoring shots than Wynnum despite the six point final margin. Chris Burdon was again a lively figure up forward as he booted six goals, as was Brendan Foote who had four and was named his side’s best for the day. Simon Purcell served the Hornets well around the middle of the ground, while Michael Harris was utilised in different positions in another solid outing. The Kings continue to gather pace as they hit the pointy end of the year, and this was demonstrated with their 68 point drubbing of Alexandra Hills last week. Ben Gibson was superb in the big win as he was named best on ground for the second week in a row. The Coorparoo forward line is dealing with life after Shane Morrison as they shared the goals amongst Tyson Spurling, Cam Allen and skipper Ben Cowan. The Hornets couldn’t have gotten a tougher game to finish the year and will need a stronger performance than last week if they are to trouble Coorparoo who are peaking at the right time of the season.

Alexandra Hills are fighting to stay in the competition as they come up against Wynnum at Kianawah Road this weekend. The Bombers are one from seven in the past two months of football and have now put themselves in a position where they must win this week to secure a spot in the finals. Last week didn’t help their cause as they were suitably touched up by Coorparoo. The 12 goal defeat has underlined their fall from grace in the second half of the year, and now Wynnum and Kenmore are hot on their heels to grab the final spot in the five. The Vikings have put themselves in this position by a brilliant win against Aspley at Aspley last week. The Hornets were too classy in their last match earlier in the year, but it was Wynnum’s day in round 17. Ben Chalmers continued his recent purple patch with a best on ground effort, while skipper Trent Farrow was very active in the ruck and around the ground and Shane McDonnell kicked six goals in his biggest haul for the year. There is plenty at stake for both of these sides, but a victory here will be even sweeter for Wynnum if they manage to win big and keep their season alive.

Caloundra will be after a desperately needed return to form this week as they face Yeronga at North Street Oval. The Panthers have not been at their best over the past fortnight, and this was highlighted in their 20 point loss to Kenmore last week. In what should have been a formality, the Panthers were unable to put on any scoreboard pressure and were always playing catch up after a big first half by Kenmore. Jake Weller did his best and was able to grab many contested marks around the ground, but his lone hand wasn’t enough to get Caloundra over the line. Yeronga have gone from strength to strength in recent weeks and will be keen to have a crack at the seemingly down and out Panthers. In round 17 the Devils gave Robina a convincing 47 point touch up. Their 18 behinds was the only flaw in what was a solid day out. Sean Blackaby kicked three for the first time this year, and Matt Lockyer was sensational in yet another best on ground effort. Usual suspects Shane McGrath and Joel Careless were also big contributors in the win and will be sure to continue that form into the last round of the season.

The Red Lions will play Robina at St Lucia on Saturday after another thumping win last week. UQ amassed an incredible 50 scoring shots in the victory (two more than Geelong in their win against Melbourne). The 50% conversion rate only allowed for 25 goals, so the 129 point margin could have been much greater had the UQ forwards kicked straighter. Hugh Millikan kicked eight goals to all but seal the competition’s goal kicking title, while Brad Percy, Luke Wray and Heath Nankivell each had three for the day. Brenton Crilly had his best game of the season and showed plenty of brilliance around the ground. They will certainly be tough for Robina to match up with, especially after their eight goal loss to Yeronga last week. The Roos didn’t display the same fight as they did in their previous wins this year and never bounced back from a slow staring first half. After heading into the main break three goals down, Robina allowed Yeronga to pile on unanswered goals in a disappointing loss. Ash Sharrock has been good all year for the Roos after crossing over from Labrador and was again named their best on the weekend. Ryan Hudson, Reece King and Jordan Miller have all been important throughout different stages of the season and will want to end their season on a high note in would will be a testing last week of football.

It has come down to the final game of the year, and Kenmore needs a big win against Kedron to book a spot in the finals. Last week they were able to produce one of the upsets of the season as they knocked off second placed Caloundra by 20 points. That win has put them in the prime position to take the final spot in the top five if results go their way. Former Western Magpie Nick Ielasi was superb in the victory was named best afield. He will again need to be prominent and continue his recent good form, as will skipper Tim Plummer and noted goal kickers Steve Webster and Brendan Stirling. Kedron’s end of year slump continued last round in another heavy defeat. This time it was UQ dishing out the punishment, and the 129 point loss could have been much worse had the Red Lions converted more of their 50 scoring shots. The recent trend of losing badly will put a huge dent in the confidence of the Lions’ back six, but if they want to get off the bottom of the ladder they will need a win here. Given Kenmore’s recent performances and the incentive of playing finals football this year, Kedron will have to be at their best to get a win at home this week. Big performances will be needed from forward line targets Steve Jamieson and Steve Rees as well as ball magnet Dan Duffield. In a match where Kedron will be playing for pride and Kenmore will be playing for their season, an interesting result is sure to be on the cards.