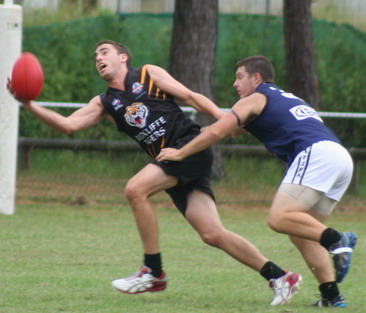 Coomera and Griffith Moorooka will be going head to head at the Coomera Sports Park this Saturday for the first game of round six. Griffith won their university rivalry match last week against UQ by six goals and will be full of confidence. Damien Hughes was best on ground with a brutal five goal outing, while Barry Morris continued his sublime form by being named in his side’s best for the fourth time this year. Coomera weren’t so fortunate in round five, however, as they were steamrolled by Nambour and Hinterland. The disheartening 74 point loss will not soon be forgotten, but Coomera are fortunate to have two of the competitions most consistent players in Thomas Clough and Dan Cross, and they will both need to be on song if they are to come home with the four points.

Caboolture will be travelling up the highway to take on Nambour at the Landsborough Sports Club. Sitting on top of the ladder, Nambour showed last week what they were capable of by disposing of Coomera by 12 goals. Simon Pickering kicked five goals in the win, while Nathan Spring and Simon Guthrie were best afield. Although Caboolture had six more scoring shots than Calamvale last week, they were only able to register a six point victory. The goals were shared in the Lions’ forward line, but Adam Wilkinson was solid throughout, while John McGill was best on ground.

The Logan City Cobras will travel to Lime Stone Park to take on the Ipswich Eagles on Saturday afternoon. Both sides are currently in the top three on the ladder, and this game will hopefully shed some light on who will be Nambour’s biggest contender this year. The Cobras had a two goal win over Beenleigh last week, with the Witney brother’s starring once again. Dylan bagged five goals and best afield honours, while Ash was named second best for Logan and kicked one of his own. The Eagles had a confidence boosting 77 point win over Redcliffe in round five, with Tayne Pilsbury doing the damage up forward and Julian Goonan being named best on ground.

UQ will host Calamvale at St Lucia this weekend in the battle of the cellar dwellers. Both teams have had limited success this year and both will be eager to come away with the four points. Calamvale danger man Alan Flower is on track to kick plenty of goals this year after booting eight in their one goal loss to Caboolture last week. Joel Meddings and Craig Timmins were also important contributors to the losing side. The Red Lions will really need to come back from the six goal defeat at the hands of Griffith Moorooka in round five. They will definitely need to contain Flower if they are to stand a chance at putting on some genuine scoreboard pressure.

The final match of the round will be between the Redcliffe Tigers and Beenleigh at Rothwell Park. The Tigers were beaten convincingly last week by 13 goals, but they will need to bounce back if they are to get a win against a genuine finals contender in Beenleigh. Last week Andrew Graham kicked a nine goal haul for Beenleigh in a best on ground performance against Logan. Redcliffe will need to watch out for Graham, as well as Brett Poppleton who was impressive for the losing side. The Tigers have some quality of their own which should prove to be difficult for the visitors to manage, with Bryan Edlond and Marcus Gregory both being consistent performers in recent times.