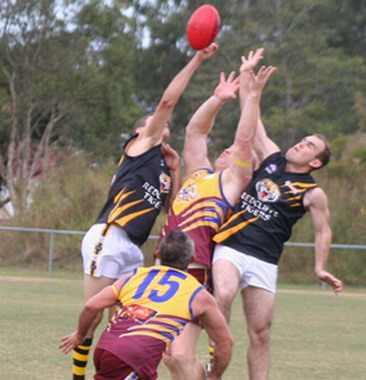 Caboolture will open round ten in State Association division two on Saturday against a depleted Redcliffe outfit. The Tigers were upset by UQ last week by 19 points. The loss proved to be even more costly following the other round nine results, as a win would have put them one game clear in the top five. Redcliffe were without a dominant forward in the contest, however Richard Kernick and Scott Davis battled hard all day. The Lions, however, took care of business last week, smashing Ipswich by 10 goals and putting further pressure on Logan for a berth in the top two on the ladder. Grant Wilkinson was superb for Caboolture with six goals, while Ben Kennedy and Steele Draper gave excellent service over four quarters.

Calamvale will take on Logan on Saturday after an admirable effort against the ladder leaders last week. In a contest that many thought would be a drubbing, Calamvale were in front of Nambour heading into the main change. They couldn’t keep this up in the second half, however, going down by 32 points. Alan Flower wasn’t able to dominate as much as usual but still finished with four goals, while Shaun Wilhelm and Rob Penn never gave up. The Cobras will need to be weary of the potential in this Calamvale squad, but will also be full of confidence following their 140 point thrashing of Griffith in round nine. Dylan Witney and Karl D’Orazio both finished with seven majors, while Ellery added three goals and was also named best afield.

Griffith Moorooka will be taking the dreaded trip Landsborough Sports Club to face the relentless Nambour side that sits unbeaten on top of the ladder. There isn’t much to say about Griffith Moorooka’s performance last week, they were absolutely pummelled and only managed to kick multiple goals in one quarter. Nambour have kept on their winning way although they were tested somewhat in their round nine encounter against Calamvale. Simeon McCulloch showed his superior class in the second half and won best on ground honours, while Ryan Nunn was also a standout. Nambour also managed to have five multiple goal scorers for the game with Adam Thornton finishing with four. This will surely be a headache for the Griffith Moorooka defenders and they will need the assistance of their midfielders if they are to keep the score from blowing out.

Coomera will travel to Lime Stone Park to face the Ipswich Eagles, with a win pushing either team into fifth position on the ladder. Coomera currently have the edge over the Eagles by percentage, but this game will separate the two and  will surely make for an interesting contest. Ipswich were beaten convincingly last week against Caboolture after a solid opening term where they held a four goal lead. Tayne Pilsbury continued his solid recent form with three more goals and Rory Bullard was a fine contributor in a losing side. Coomera also held the lead early in their match against Beenleigh last week, giving up a two goal lead at half time to eventually lose by 14 points. Marty Bordignon was close to best on ground despite the loss, while Tom Clough added three goals and was particularly useful again.

UQ will look to build on their big win last week as they take on Beenleigh at St Lucia on Saturday. The Red Lions were able to knock off Redcliffe in a blistering display, largely due to Jason Di Petro and his seven goal haul. Sean Westerhuis was  also in good form but it will take an effort from all 22 players this week. Beenleigh showed some good composure in taking care of Coomera last week, coming back from an early 24 point deficit and going on to win by three goals. Andrew Graham finished with three of his own and now has 29 goals for the year, while Matt Kimpton had another telling outing and Mitch Vasterink was named best on ground.