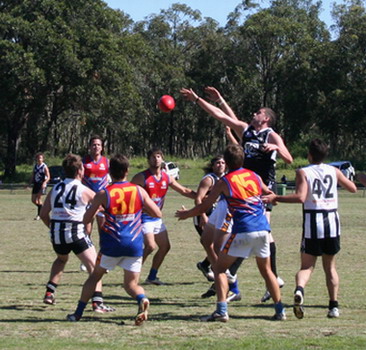 The weekend’s action will kick off at Graham Road on Saturday, where Aspley will take on Kenmore. Winless so far this year, the Hornets are coming off a disappointing showing last week where they gave up a 28 point lead in the last quarter, only to go down by 15. The Bears had their first loss for the year in round 3 after being comprehensively beaten by UQ. Michael O’Neil and Michael Anic-Kaliger were prominent in the 50 point loss, as was skipper Tim Plummer with 2 goals. Aspley has had great service from Will McElroy so far this season, and the Hornets will hope his fine touch continues through the middle of the ground.

Alex Hills will host Kedron at Keith Surridge oval, with both teams looking to bounce back from significant losses in round 3. The Bombers were beaten by reigning premiers Caloundra by 4 goals, while Wynnum were victorious over the Lions by 7 goals. Dan Duffield and Lee Fazackerley have continued to be the danger men for Kedron, as has Steve Jamieson who is currently one goal adrift of the competition goalkicking leaders. These 3 players will definitely be on the radar of the home side who have been well served in the early stages of the season by Alex De Hayr, Brendin Bloye and Justin Brooke.

Coorparoo will be travelling to the north coast to play a Caloundra outfit that has finally got its season up and running. Following their round 1 loss to UQ, the Panthers have been playing like the perennial performers they have proven to be in recent years.  They accounted for Alex Hills last week where Brodie White continued his white hot form with another 3 goals, and Barry O’Brien took best afield honours. The Kings, however, are sitting third from the bottom with just the 1 win so far this year. They had a tough loss to Robina last week and although Luke Cauchi and Rodd Crawford were solid, it will take a mighty effort to get over the top of the Panthers.

The Red Lions will be at home to Yeronga this week with both teams registering encouraging wins in round 3. UQ will know they are facing a side who can go the distance after the Devils 4th quarter comeback against Aspley last week. Brad Laycock was the danger man up forward, booting 6 goals in a terrific win, while Brady Robinson and Shane McGrath both provided great service around the ground. The Red Lions will look to build from their 50 point demolition of Kenmore last week with another positive outing. Luke Wray and Hugh Millikan have been strong targets up forward so far this year, booting 22 majors between them. Louis Straker and William Rowles also stood out in last week’s win and will hope to continue their excellent form.

The last game of the round has newcomers Robina up against Wynnum at home. Only .10% separates the two teams on the ladder so there is plenty of incentive to come home with the 4 points this week. Both teams had comfortable victories in round 3, with Wynnum holding off Kedron by 41 points, and Robina beating Coorparoo by 23 points. Ryan Weterings popped up with 3 goals for the Roos, while Steve McInerney was best on ground for Wynnum.  Going into the Easter break this is a must win game for both clubs, as a victory will even up the win/loss record for the year and put them in a good position to capitalise after the break.