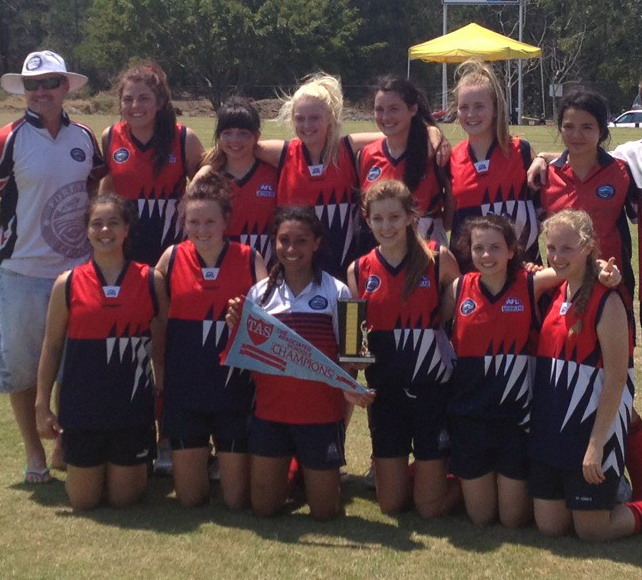 On a scorching Saturday morning at Ormiston College, St John’s Anglican College won the 2012 TAS Girls Carnival Day over the hosting school in a game of high quality football.

With 9 senior teams and 2 junior teams entered in the competition (after a year off in 2011), the TAS Girls Carnival had all the atmosphere of the Gabba with great support from parents and friends.   The standard of the football was very high with girls football growing steadily in all aspects from NAB AFL Auskick, school, club and AFL 9s.

In 9th place for the day was St Paul’s who haven’t been in an AFL competition since their withdrawal from the BSGSA Term 1 Wednesday afternoon competition back in 2009.   St Paul’s performed well on the day and showed some promise but couldn’t come away with a win for the day.

In the 5th v 6th playoff game, first timers Faith Lutheran played Cannon Hill Anglican College (B) in another quality game.    CHAC (B) ended up pipping Faith by 2 goals to finish with 5.2.32 to 3.2.20.

Cannon Hill Anglican College (A) were unlucky not to make the final after going through their round games undefeated but were pipped at the post on percentage and relegated to the 3rd v 4th play-off game vs West Moreton Anglican College.  With a strong breeze picking up both teams fought hard to contain the scoring at one end of the field with CHAC (A) 6.4.40 def WMAC 3.2.20 in a high quality game.

Grand Final between St John’s Anglican College and Ormiston College confirmed St John’s dominance over an out-sized Ormiston with the home team going down 1.0.6 to 8.6.54.

All games were played in great spirit and thoroughly enjoyed by all you participated and watch.