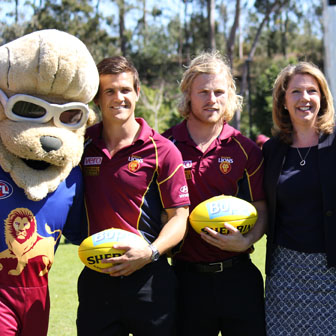 The Brisbane Lions’ new elite training and administration facility (ETAF) will be developed as part of a wider regional sport and community recreation precinct at Springfield Central, it was announced today.

The world-class facility, expected to be completed in mid-2016, will be the centrepiece of the new sports and recreation precinct, to be developed adjacent to Springfield Central Railway Station.

Minister King announced a $15 million Federal Government budget commitment had been made available for the project – a key piece of infrastructure in the western corridor of south-east Queensland.

As a result of the funding, the Lions and the AFL have signed a Heads of Agreement (HOA) with the Ipswich City Council and Springfield Land Corporation for the development of the ETAF.

The HOA includes a 99-year lease of the site to the Lions.

The development will be located on a five hectare green-field site at Springfield Central – south-west of Brisbane – 25km from Brisbane CBD and 15km from Ipswich CBD.

The site will enable the Lions to develop a “best practice” facility, with significant expansion space, capable of accommodating the Club’s needs over the next 99 years.

Mr Johnson said the green-field site ensured the Lions did not have to compromise on the ETAF and was the only viable long-term option for the Club.

“Today is a strategic investment in our future – a world-class facility supporting community assets that everyone at the Brisbane Lions will call home and be proud of,” said Mr Johnson.

“It will not only enhance our ability to develop players, but also attract and retain others, while strengthening our ties with the community via an expanded footprint across our region.

“On behalf of the Brisbane Lions, I’d like to thank the Federal Government, the Ipswich City Council, the Springfield Land Corporation and the AFL for their support and vision in bringing this project to fruition.

“The benefits are significant, not only for the Lions, but also for the community given the facilities that will be available to them.

“It’s been a long process, but incredibly worthwhile, and I look forward to seeing the development take shape as well as forging stronger ongoing relationships with the local community.”

AFL Deputy Chief Executive Officer, Gillon McLachlan, said: “We welcome the announcement of this new development and congratulate the Brisbane Lions on securing the club’s long-term growth through what will be a world class facility.

“Not only will this facility ensure the Lions remain at the forefront of elite player development but it will also significantly benefit the local community as part of a broader sport and recreation program.

“The Lions have always maintained a strong community connection and that will only be enhanced through this exciting new facility.

“This development equips the Lions with the necessary facilities to achieve a high level of sustained success on a number of fronts, while bolstering their links to one of the country’s fastest growing regions.

“On behalf of the AFL I want to thank those parties responsible for making this development a reality, including the Federal Government, the Ipswich City Council and the Springfield Land Corporation.”

1.       The first stage of the ETAF development will include:

–          Administration headquarters designed to maximise integration across the business

2.   Stage 1 of the ETAF development is expected to cost in the order of $60 million with funding being provided by contributions from the Springfield Land Corporation, Ipswich City Council, Federal Government, Brisbane Lions and the AFL.  Further funding will also be sought from other parties including the Queensland State Government.

3.   The second stage of the ETAF development will include:

4.   Upon the completion of Stage 2, the ETAF will have the potential to host NAB Cup and NEAFL matches.

5.   The Club currently has three training venues – the Gabba, Giffin Park at Coorparoo and Yeronga. The move to Springfield Central will ensure the Lions’ train at the same venue across the entire year.

6.   The decision to relocate the Club’s training and administration headquarters from the Gabba to Springfield was ratified by the Lions’ Board after a thorough and robust process to determine a new site.

7.   The process started more than two years ago when the Club called for Expressions of Interest (EOI). The AFL has been a key stakeholder throught the duration of the process.

8.   As part of the process, Mr Johnson and fellow director, Mr Mick Power, AO, did not participate in the final vote to approve the HOA with the Ipswich City Council, in order to remove any concerns about potential conflicts with their business interests in the region.

Springfield Central is located within Greater Springfield – one of the largest master planned cities in Australia.