Seven Queenslanders drafted to the AFLW 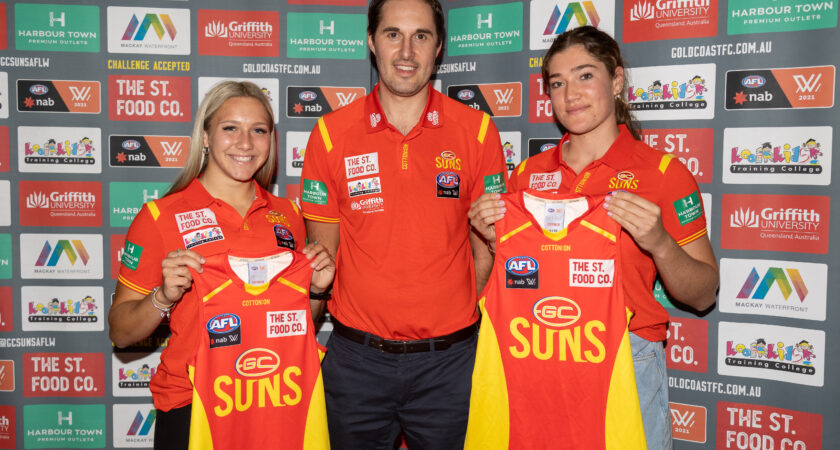 In a sign of how strong female footy continues to be in the Sunshine State, AFL Queensland congratulates the seven Queenslanders who were drafted to the Brisbane Lions and Gold Coast SUNS in tonight’s 2021 NAB AFLW Draft.

On the Gold Coast, Bond University and Broadbeach/Burleigh junior Teagan Levi was pick #6 for the SUNS, while fellow Bullshark and Southport junior Giselle Davies was pick #30.

From one coast to the other, excitingly three Sunshine Coast products were selected for the Brisbane Lions.

2021 All-Australian Maggie Harmer was the Lions first pick at #18, while her Maroochydore Roo’s teammates Bella Smith and Mikayla Pauga were also drafted to the Den with picks #35 and #46.

Before they were Roo’s and Brisbane Lions Academy members, Harmer and Smith learnt their craft playing their junior footy at the Noosa Tigers.

A footballer up until 2019, Luka Yoshida-Martin from 2021 QAFLW Premiership winning team University of Queensland was pick #53.

From the Brisbane Roar to the Brisbane Lions, another cross-code sensation Lucinda Pullar from Bond University was pick #58, rounding out the Lions five picks.

A warm welcome too to Queensland and the Gold Coast SUNS to top Victorian talent Charlie Rowbottom at pick #1, and Northern Territory product Ashanti Bush at pick #8.

Head of AFL Queensland, Trisha Squires, said she was thrilled for the AFLW’s newest recruits.

“Congratulations to the seven Queenslanders who’ve been drafted to the Brisbane Lions and Gold Coast SUNS” she said.

“The footballers selected tonight represent the future of the NAB AFL Women’s competition, they’re the future stars of the game and in doing so will inspire the next generation of Queensland girls hoping to follow in their footsteps.

“All seven have come through the football pathway, playing in our QAFLW, which continues to be regarded as one of the strongest and most competitive women’s state league competitions in the country. The professional standard of our QAFLW clubs has paved the way for elite level women’s football.

“Add to that, the touch points the draftees have had through their junior football clubs and through our AFLQ Schools Cup.

“I can’t wait to watch what this talented group of footballers can achieve with the Gold Coast SUNS and Brisbane Lions in the NAB AFL Women’s competition.”

It was a special night for the Levi family, with 2021 All-Australian Teagan joining sister Maddi in the red and gold next season.

With Maddi in Tokyo representing Australia in the Rugby 7s, thanks to FaceTime she was able to be part of the moment.

“I’m really disappointed Maddi isn’t here with me, but she is off living her dream in Tokyo and I’m so proud of her,” she said.

“I can’t wait for pre-season and to join the girls. I think my strengths are my tackling pressure, and my speed and agility, and I am super excited to bring that to the team.”

AFL Queensland would also like to congratulate former Bond University player Casidhe Simmons on being selected with pick #60 for the GWS Giants following her standout season with the UNSW Eastern Suburbs Bulldogs, in Sydney.

With pre-season just around the corner, Brisbane Lions will be looking to defend their 2021 AFLW Premiership, while the Gold Coast SUNS enter a new chapter under the leadership of new Head Coach, Cameron Joyce.