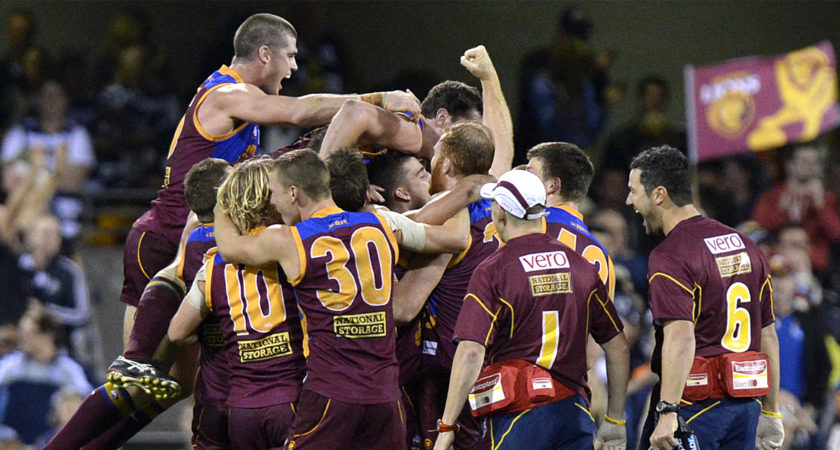 Football at all levels has been postponed until at least the end of May meaning fans across the Sunshine State will not be able to cheer on their sides in what promised to be an exciting 2020 AFL season.

While there’s no footy on the weekends, we’ve compiled a list of some of the best games from across the years that are definitely worth a re-watch.

Palm Beach Currumbin were on the verge of winning a third straight QAFL premiership and had lost just two games over the past two seasons. Surfers Paradise on the other hand, were hoping to break their premiership drought which dated back to 1998. The two sides traded blows but little could separate them with scores level at both half time and three-quarter time. Dan Green’s goal in the fourth quarter edged the Demons ahead who held on by a mere two-points at a rocking Metricon Stadium.

The class of the women’s state league was on show when the Bluebirds and Devils rounded out a packed day of Grand Final action at Leyshon Park in 2016. While AFLW was still one season away, 16 players between the two sides would go on to play in the national competition. Having lost the 2015 decider to Coorparoo, Coolangatta Tweed claimed the premiership in a narrow two-point affair in large thanks to Kalinda Howarth who booted the winning goal with minutes to spare.

Easily the greatest game in NEAFL history which pitted AFL powerhouse against standalone club. Sydney entered the game having lost just three games for the season and boasted the competition’s best defence and future Brownlow Medallist Tom Mitchell in the midfield. The Swans made lightwork of the Hornets at Graham Road, establishing a 32-point lead at three-quarter time before the Hornets kicked into gear in the final term. Aspley created history as the first standalone club to beat an AFL team in a Grand Final all thanks to Dan Smith who kicked the winning goal after the siren to seal an unlikely two-point win.

Of course, the Miracle on Grass was bound to make this list at some point. After all, it was the biggest comeback in Brisbane history. Geelong, who looked poised to mount another run deep into finals, etched out a 52-point lead after Steve Johnson goaled in the sixth minute of the third term. From there, the Lions would go on to kick nine of the next ten goals – evening the scores with just two minutes to go. With the clock ticking down, Brisbane forced a turnover in their defensive 50 and quickly worked the ball upfield to Ash McGrath who marked on the siren. In his 200th game of AFL, McGrath kicked truly and produced the most improbably of comebacks the Gabba has likely ever seen.

Gold Coast had climbed out to a 36-point early lead at Cazaly Stadium in Cairns – a lead that didn’t last long with the Tigers soon finding their footing in the game. Richmond would kick the next seven goals of the game in a blitzkrieg 20-minute period either side of the main break to take their first lead of since the opening minutes. The two sides continued to trade blows before Josh Caddy (still with the SUNS) and Jarrod Harbrow booted two majors to peg the game back. Gold Coast continued to toil and in the game’s closing minutes and sent the ball inside 50 only to be marked by Karmichael Hunt, who went back to kick the winning goal after the siren. SUNS by two.

The first ever QClash in the AFLW arena certainly wasn’t a letdown. The copious links between the two clubs along with their standing within Queensland football provided the perfect build-up to the clash. On the field, we saw a great game of football. Brisbane dominated early proceedings but couldn’t capitalise on the scoreboard while Gold Coast fought back in the second half after two clutch Kalinda Howarth goals. The SUNS finished fast but even they couldn’t seal the win and the game eventually ended in a draw.

The Lions were out for revenge against the Crows who spoiled Brisbane’s inaugural season to win the first ever AFLW premiership. It was only fitting the two sides would meet in the opening round of the following year with Norwood Oval playing host. Sabrina Fredrick was unstoppable in the air while first year livewire Sophie Conway made a name for herself with a cheeky finish while Jess Wuetschner’s two goals ensured the Lions ran away 12-point victors.

AFL statement on postponement of 2020 season
Record..Get your footy record!